Standing along the banks of the Charles River on a mild October afternoon, Tristan Fitzgerald '22 draws back his Pflueger President Spinning Combo fishing rod and expertly casts a baited hook into the water. Just beyond him, crew shells skim beneath the Eliot bridge, and in the distance birds dart and call among the reeds over a back drop of afternoon traffic. To all appearances, Fitzgerald is a boy taking in a little down time on a Cambridge afternoon; in fact, he and six other juniors are part of a new BB&N fishing class, a Zen-like elective simply titled, Fishing.

For four days a week all fall, Upper School students from all grade levels have joined Craig McLaughlin (affectionately called Mac), Assistant Head of Athletics and Varsity Baseball Coach, to partake in the activity. "We weren't certain what to expect as far as turnout when we opened the class," Mac says. "But sign up went quickly, and nobody missed a single day. They were even out there in the rain!"

The idea for the class was born last summer when Chuck Richard, Director of Athletics, and his team were brainstorming ways to run a fall sports program given the restrictions in place due to the COVID-19 pandemic. "We wanted to find more outdoor options for students to have an outlet from academics," Richard notes. "And we realized we have a gem of a location on the river with a boathouse and dock that were being underutilized...Mac mentioned fishing, and it was a perfect fit; no travel, outside, social distancing, and fun." 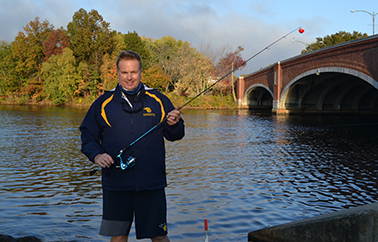 In McLaughlin, BB&N had the perfect teacher for the program. When he isn't helping out with the athletics department or coaching the varsity baseball team, Mac has earned a reputation as an expert angler. As a licensed U.S. Coast Guard master captain, he runs his own fishing charter out of Winthrop in the summer, and can match fishing acumen with best of them. Under Mac's tutelage, students get their fishing licenses, learn about different types of knots, the best bait, casting techniques, strategy, environmental stewardship, and—of equal importance in these screen-dependent times—students learn to unplug, unwind, and appreciate just being.

"There's a ton of value in getting back to nature through fishing, especially for these kids who are so tied to their phones and screens." Mac says. "They learn a lot—about our native fish, waterways, and problem solving—but they really learn how to relax."

Mac should know, his 27-foot fishing boat is appropriately named "Mood Swing III" because of the effect it has on anyone who takes to the water in it. BB&N's fishing program has had a similar effect on students.

"Overall there has not been one bad day of fishing," says Fitzgerald '22. "Coach Mac is extremely laid back and created a great low-pressure environment. It was the perfect way to take off some stress during these times and it was great to have an after-school activity in which I could see friends and have fun."

Given the popularity and success of the class, Richard is hopeful it can be a building block to a more varied and outdoorsy athletic curriculum. "We've realized that we have a lot of students who want to be active outside, but may not necessarily want to join a traditional sport.... We'd love to be able to create opportunities for that team experience through programs on the water or in the woods."

To that end, other programs are already in place. While Mac's students plumbed the depths with their lines, other students set out on afternoon paddles. Expert outdoorsman Jon Duval, a BB&N class of 1997 alum, has been overseeing a fledgling boat program which allows for recreational use of kayaks and canoes for students. 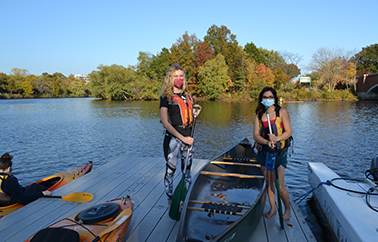 Activities such as this and fishing might serve as the entrée to more nature-sports, but on this fall afternoon Mac and his class are happy to just unwind on the river at the end of a full school day.

"I've got one!" calls Howard Brown '22 as he holds up a tiny Pumpkin Seed fish. It's not the three-pound bass someone caught the previous week, or a glowing yellow sunfish, but it's enough to bring a smile to everyone's faces.

Admiring the catch, McLaughlin nods his head knowingly. "Fishing is like medicine," he says to no one in particular. Everyone could use a bit of that.