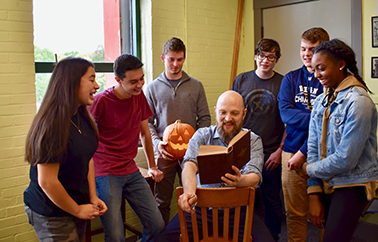 In the semi-darkened classroom, lines from Homer's Odyssey, translated into Latin, project onto Latin teacher Walter Young's checkered shirt and the old-school green chalkboard behind him. Momentarily, he is clothed in the language he loves, but then he shifts toward Samirah Moody '21. It's her turn to translate.

"And after they turned..." Samirah begins, then pauses, her focus intent on the board.

Young drops to his knees and sits on his heels. Clenched fist to heart, he whispers, "You can do this...." After a few unblinking seconds, he says quietly, "After their..."

"Good, good, good!" Young exclaims as he jack-in-the-boxes back to his feet.

Stephanie Gutierrez '21 appreciates Young's quicksilver spectrum of theatrics. "Class is a blast! He makes me focus on him and what he's saying because he's just everywhere! He'll get down on his knees or make a T with his body to mean 'that' for an indirect statement, which makes it fun."

"Dr. Young is so into it," says Angus Crafter '22. "He's funny and nice, and he wants everyone to learn; he'll make sure everyone's engaged all the time. You get work done—and everyone's having a great time." Angus points to Young's daily classroom routine as a key to that engagement. "He'll ask someone to read, someone else what this word means, what this grammar construction is, so everyone is involved."

Henry Price '21 identifies an additional educational value as well as an empathy lesson in the daily oral translations. "We get to hear everyone talk, and we all get to learn from others' mistakes, so I think everyone is more comfortable trying their best. If they get something wrong, no one's going to judge them for it."

Young himself believes that "the only way to do Latin is to do Latin." Following the grammar-heavy first two years of Upper School study, which builds on the foundational work students can begin in the Middle School, these eight Latin III students are now using all of the grammatical constructs they've learned to read stories. Daily sight reading also allows them to work with irregular verbs, which are common and difficult, and to build their vocabularies through idiom.

After successfully navigating "contendere remis"—to dash by means of the oars, or to row—one of the Idioms of the Week posted on the whiteboard, Angus begins to flounder a bit: "They entered...the entrance...."

"Okay, here's what you're doing," says Young. "You're flying to a word that you're a little unsure of"—he circles the projected "introitum" (entrance) with chalk—"and then you're hovering above it. What if we continued on to a word that you do know?"

Angus locks onto the verb, animavertērunt. "They turned their minds..."

"They turned their minds," says Young. "So, they noticed..."

"Oh, oh," says Angus excitedly, "they noticed that the entrance..."

"Don't lose the pilot!" Young commands. He circles "munitum" and draws arrows to its modifiers, creating a football-play-like diagram that unsnarls Angus's passage.

"Oh! They noticed that the entrance was fortified by both the nature of the place and by hand," he reads quickly.

To be with his students as a prompt and a strategist when they get stuck, Young says, "to give them enough questions to get out of the ditch, questions that they internalize for later use by themselves—for me, that's a good class."

Acknowledging that learning Latin requires a lot of exposure and ample encouragement, Young has asked seniors what surprised them most about studying the language. "Many say that they were able to drop buckets into wells of perseverance that they didn't think they had," he says. "They learned that if they stick with it through the difficult moments, they feel the rewards. It's a wonderful moment."

Stephanie finds it rewarding, too, when she can discern what a word in English or in her native Spanish means because of its Latin roots. "It kind of freaks me out sometimes because I look at words and now I just see Latin! In math class today, I saw the alter—other—in 'alternative.' I'd never seen that before!" she says, grinning. "But I find it very pleasant because now I know more, and I feel like I'm actually learning."

Reviewing the verbs he asked the students to memorize for homework, Young focuses on orior, orirī, ortus sum, to rise. On the board he draws a horizontal line and an X at its midpoint. "Traditionally, empires placed themselves in the center. It was a very western perspective that the west, meaning Europe, was the center of the world. So, using—"

"And then here," says Young, circling a point far left of center, "where the sun sinks down, is the west, which people used to call the Occident, from occido, occidere, which we've learned before means 'to fall.'"

Still thinking about orior, orirī, James asks, "Is that where we get 'horizon' from?"

"I never thought of that before," Young says in a low voice of wonder. "Probably—it's something we can look up."

Alek Goodpaster '21 offers that hiberna means "winter quarters" and then wonders aloud if ancient Romans had winter homes. Learning that they did not, he continues, "Maybe soldiers stationed at a camp?"

"Yes, so because you're too far away from home and you're tucking in for the winter, you have built a hiberna, a winter castra, which we've said before means 'army camp.' Over the winter, they're probably going to replace some of the wood with..."

"With stones," says Young. "After a while, the army walls, these castra, are going to become...?"

In addition to liking "the logic of Latin," Cam Gaisford '22 says, "it's also interesting because we learn about the history, the Roman culture itself."

Young hopes that his students will leave his classes with an understanding of "the tremendous cultural inheritance," he says, "that is part of the dowry of the ancient world to modern people. Latin conveys an especial beauty that informs your intellect and your conscience; it gives you a deepened perspective of how complex and beautiful the world is. What I really want is for my kids to love the language."

Though the label's implications of irrelevance are undoubtedly anathema to Young, he makes this so-called "dead" language come alive for his students. Whether acting out a Cyclops's visit to an oculist—"imagine: your doctor says 'cover one eye and read the line'...it's all black!"—or explaining the rhetorical device chiasmus by singing "I am stuck on Band-Aid 'cause Band-Aid's stuck on me!", his incandescence has ignited these students' curiosity and appreciation.

"Dr. Young's approach to teaching and his love of Latin make me want to learn more," Henry says. "It feels really nice to have a teacher who cares about what I do. It's a class I look forward to every day."