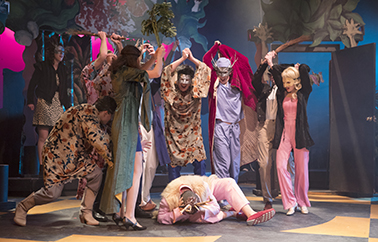 When audiences sat down for the annual Upper School fall play, many were surprised to see the typical Elizabethan setting of William Shakespeare's The Merry Wives of Windsor, spun into contemporary times. The play was set in Windsor, Florida, no less, and the amazing costumes and creative set design intentionally evoked certain attributes from the world of reality television. The result was a production that rang true with the audience and seemed apropos to today’s media-driven culture.

This was the debut production of new Upper School Theater teacher Ross MacDonald, who noted in the Playbill that Shakespeare’s plays are not wed to certain locations, or even centuries, because in the end they are about humanity. The thespians masterfully delivered Shakespeare’s challenging lines and the physical comedy that was necessary to bring out the absurd hilarity of the plot. It was a play full of trickery, jealousy, love, gender roles, and deceit—all very much relevant today. The play also incorporated musicians, which allowed more students to be involved in the production and added another rich layer to the overall performance.

Click here for a photo gallery of the show.
Powered by Finalsite