Considering their options for the 2020–2021 play season from mid-lockdown last April, theater teacher and director Ross MacDonald, along with his colleagues scenery and lighting designer Eugene Warner and costume designer Louise Brown, ticked through the many pandemic-imposed restrictions.

"I couldn't do Romeo and Juliet or something contemporary, where so much intimacy is required," MacDonald said. "I also wanted to address what was happening in the nation. So, I thought... social-distant performance, outdoors, face masks, political upheaval.... Well, it's got to be the Greeks!"

And so it came to be that MacDonald revived Sophocles' best-known Theban tragedy in Cambridge, imbued it with 21st-century significance, and adapted it to pandemic requirements. Needing an outdoor venue, he chose to stage OR21  Oedipus Rex: A Retelling at "the mansion," the abutting Pechet House property BB&N acquired five years ago. Filmed instead of performed before live audiences, the production created collaborative opportunities for film and video teacher Chris Gaines and his students, who manned the cameras, and for Nicky Tao '21, who, with input from orchestra director Elliot Cless and MacDonald, composed a soundtrack of electronic textures and acoustic strings to accompany the filmed adaptation. 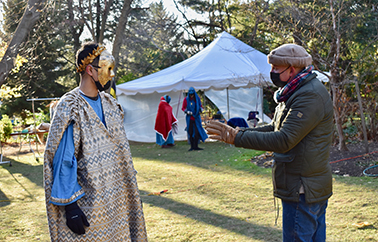 Writing the script of OR21, MacDonald faced a kaleidoscope of shifting challenges: to incorporate as many students as possible, accommodate their split-by-grade on-campus rehearsing schedules, and create a piece that would work on camera and would be filmed outdoors in November. He beefed up certain roles and made the Chorus and its leader emblematic of protest movements across the decades. While the weather gods tested the troupe's mettle—treating them to rehearsal in late-October snow and to filming on a 30-degree day—MacDonald armed them with thermal under-layers, fleecy hooded capes for off-set time, hand-warming packets, and vats of hot chocolate, not to mention frequent injections of his can-do spirit.

"Honestly, I didn't see it as a problem," MacDonald said. "I saw the situation and asked myself,  what are we going to do? And I tried as best as I could to lead by example." He relied on his British Army company commander's expression—"Don't give me problems; give me solutions"—and is grateful for school support of his efforts to provide a quality experience for the students, "to give everyone a chance to shine individually but work collectively," he said.

Another favorite saying of his—"Improvise, adapt, and overcome"—became so familiar to his students that a late-rehearsal rallying cry elicited mock groans, eye rolls, and laughter. "You did NOT just say that, Mr. MacDonald," said assistant director CC Chung '22, unable to hide her smile even beneath a mask.

Time and again, the students brought their youthful exuberance and flexibility to the daunting situation. "They've never complained, they've just embraced it, and they work really well together as a team because there are no egos. I told them, most sincerely, even including some professional shows I've been involved in, I'd rather be with them. They're incredibly bright and articulate, genuinely brilliant young people," MacDonald said.

The students, in kind, appreciated MacDonald's work. "Our cast has a group chat," said Julia Shephard '22, "and on the night that we finished filming, we sent probably 3,000 messages about how fortunate we felt to have a fall play experience and how much everyone—Mr. MacDonald, Ms. Brown, Mr. Warner, Mr. Gaines, film students, costume designers, set designers, actors—contributed to making that possible. Almost everyone sent an emotional paragraph-length text about how worried they had been about Art in the fall and how instrumental Mr. MacDonald was in making this play happen. It's been incredible to have a theater teacher and director who has really supported the students at every step."

Sophomore Alexandra Fabbri noted, "Mr. MacDonald pushed us to act in different styles than we were used to. Even working outside, six feet apart, under a Greek mask and COVID mask, I honestly think I learned more from this production than I would have in a typical play."

Andrew Zhao '21, who played Oedipus, said, "Mr. MacDonald has recreated the joy of performing in a pre-pandemic show. He's an amazing teacher and director. What I'll also take away is how great my castmates made the production process. I think that the weirdness of the situation actually enhanced my feeling of unity with the cast."

Also a student in MacDonald's Advanced Theatre Studies course, Andrew appreciated the hybrid combination of interacting with his peers in a tent on the baseball field or in the courtyard as well as working individually with MacDonald on remote-learning days.

While teaching remotely last spring, MacDonald seized the opportunity to augment the course's curriculum beyond its focus on acting. "I modeled it somewhat on the British school syllabus of all the elements that go into creative theatre—acting, designing, directing—and used tools like Padlet so that students had something that they could work with on their own." With those tools in place, MacDonald appreciates that the hybrid model allows him to do physical acting exercises and scene work with both his Advanced students and the freshmen in Theater Studies 9. 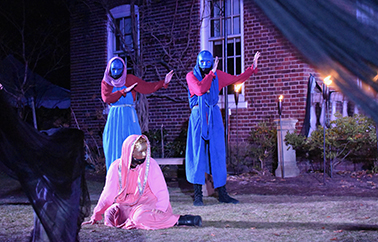 On the last night of filming, under a waxing crescent moon and rigged stage lights, student actors wearing toga-like robes materialized from a smoke machine's mist. Visible beneath colorful face-molded masks, their black Covid masks mirrored the black gauze draping the stone fountain and terrace railings, both referencing dire disease afflicting the masses. In parallel fashion, too, both the students and their characters were persevering, making their way forward amid trying circumstances.

"I hope that we've dealt with it in a way that is creative, which is what we're meant to be," said MacDonald. "Creative problem solving: that's what theater does."