If it’s the first two weeks of March and you come upon nattily dressed students rehearsing emphatic speeches in isolated corners, then you know it’s time for the annual rite of pre-Spring-Break passage, the Sophomore Debates.

Prompting the students to use their academic skills beyond the classroom, the Debates have them grapple with current, real-world issues, such as social-media censorship, repatriation of museum-held artifacts, abolishing gas-powered vehicles, and genetic modification of mosquitoes. Armed with their well-researched, incisive points, they then square off against their peers in other English 10 sections.

For more than 30 years, the English Department has asked students to apply the critical-thinking and essay-writing skills they’ve been developing to craft persuasive, well-delivered oral arguments. Working in three- or four-person groups, the students research independently, collaborate to build their cohesive team argument, write their individual speeches, and practice their delivery, a process that sometimes benefits them in ways they aren’t expecting.

“My debate was a really interesting experience because I was arguing a side that I didn’t completely agree with,” says Alexandra Fabbri ’23. “It was actually cool to look at a situation from another perspective, and it pushed me to become a more open-minded thinker.” 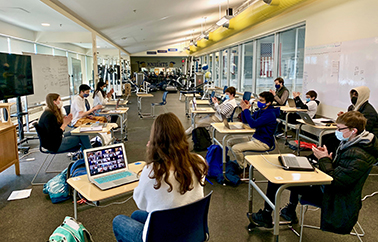 With pandemic restrictions preventing students from competing classes from gathering in one room to watch their classmates debate, they’ve instead joined together on Zoom to support and learn from one another.

“I absolutely loved delivering my arguments to the Zoom class because I got to embrace my theater skills in an academic setting,” Alexandra says. “I treated the debate like a performance, which made it feel so much more fun and less new and intimidating.”

In turn, Jay Kulkarni ’23 brought his athletic experience to the debates. “For me, preparing for the debate was akin to preparing for a big game—butterflies in my stomach, going over the game plan in my mind, and visualizing the win,” he says. “During the five-minute prep time prior to the rebuttalist speaking, it felt like halftime of an intense football game with a tied score, where all of us come together to uplift each other and formulate a plan for the ‘second half’—the teamwork was exhilarating.”

Long-time English 10 teacher Beth McNamara notes, “Sophomore Debates are the perfect way to round out the winter term. Just as everyone is getting worn down, they find themselves pulling together to represent their section and compete against another class. It adds new spark, energy, and intensity right before the Break!”

To infuse a little friendly inter-class competition into the Debates, a three-person panel—comprising faculty/staff and juniors or seniors who excelled in their own Sophomore Debates—judges each match, but the students often realize that the project earns them other, much more significant rewards.

“Although winning the debate was definitely a high point,” Jay says, “what I valued most from the experience was the feeling of deep satisfaction from learning about censorship and leaving with a sense of expertise on the subject.”