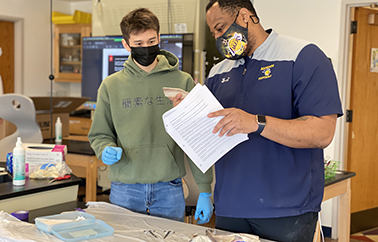 It was shark week at BB&N for seniors in Terry Cox’s Marine Geology Cass before March Break. All semester, students have been learning about the history of the ocean floor and different marine species. So far they had dissected clams and squid. Then came the dogfish shark. Also known as the spiny dogfish, this compact shark species was given its name because of its preference for hunting in packs.

Each student donned rubber gloves and used various instruments to identify the organs they had studied in diagrams. “We recently had presentations on the different parts of the shark, like the respiratory system, digestive system, and nervous system, so now we can see what we learned about up close in real life,” said Sofii Dushku ‘21.

In addition to learning about the shark’s organs, Cox pointed out the differences between sharks and other marine species. “A shark’s skeleton is made up of cartilaginous tissues instead of bone which makes them agile hunters,” explained Cox as he walked between desks checking in on each student’s progress.

Marine Geology is a popular elective for seniors. Since pre-covid the class took advantage of field trips to local oceanite research locations, students were very happy to still be able to learn in such a dynamic hands-on way.