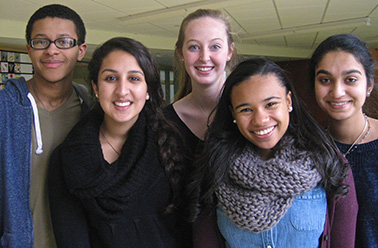 One week this past October, Cierra Robson '15 had a baffling medical mystery to solve.

"The patient was an 11-year-old boy," she recounted. "I was given an x-ray; he had some hip pain but was able to walk. He'd had a fall during football practice, he was a little overweight, and he was from Hawaii. That's all I knew." Her task was to form a diagnosis and a treatment plan. After researching online how to read an x-ray, Cierra then sifted through descriptions of hip problems, and eventually she found an x-ray that looked exactly like her patient's. "It was a slipped capital femoral epiphesis," she said without a stumble, a rare ailment caused by an inexplicable type of bone degradation found usually in heavier boys. "When I discovered that it's more common in people of Hawaiian heritage, I knew I had it!" Cierra's excitement was matched by her teacher's. "He said, 'Wow—I didn't think anyone would ever get that—it's a pretty obscure one!' When I read his comment, I immediately thought, 'I could totally be a doctor.' That case was a huge boost to my confidence, and it encouraged me to keep searching for more accurate diagnoses."

Cierra and her classmates from such places as California, England, and China grappled with this case study in a Medical Problem Solving class offered by Global Online Academy (GOA). Four other BB&N pioneers ventured with her this past fall into the rapidly expanding educational frontier of online courses. "It was a good alternative to the usual class setting because it provided so much flexibility and required so much independence," said Adon Wade-Currie '15, who took Applying Philosophy to Global Issues. "It was rewarding in a different way from regular classes but equally valuable."

A Great Fit
Small classes, rigorous preparation for future study and work, strong teacher-student relationships, excellent teaching, openness to diverse perspectives: these hallmarks of a BB&N education made it a prime candidate for membership in GOA, a consortium of 56 other independent schools from around the world that share many of the same values. As Eric Hudson, GOA's director of teaching and learning, explains, "GOA was founded on the notion that we can provide opportunities for students to engage the larger world through both coursework and interactions with their teacher and classmates." A former English teacher at both the Middle and Upper Schools here, Hudson is uniquely qualified to assess the compatibility of the two institutions. "BB&N's commitment to broadening its students' understanding of the world is a great fit for GOA." By learning with classmates and teachers from such places as Beijing, Johannesburg, and Jakarta—not to mention Louisiana, Minnesota, and Oregon—students are apt to become more globally aware, according to Hudson, "while acquiring skills that will help them succeed in college and beyond: how to collaborate across distance and culture, how to leverage the internet to pursue deep and meaningful learning, and how to share their work and ideas with a larger audience."

Upper School Director Geoff Theobald notes that Head of School Rebecca T. Upham has been focusing the School's attention on global issues for several years. "We need to address globalism as a skill set for our students," says Theobald. "We're thinking about new ways students need to learn, new opportunities for students to think beyond our four walls." Acknowledging the compatibility of GOA with BB&N's mission, values, and best practices of teaching, Theobald says that becoming a member school was additionally appealing because of the opportunities for "connective work between student learning and teacher learning in a new genre that is clearly going to be an increasingly significant piece of the overall fabric of education. This was a way to take some ownership of a change that is coming down the pike in a very clear and loud way."

From his vantage point, Hudson hears a great deal from GOA's member schools about advancing into the 21st-century learning landscape. "Many schools are wrestling," he says, "with how to teach students to navigate a world that is increasingly complex, increasingly networked, and rapidly changing. GOA is a 'living example' of a global network that relies on technology to connect students to people and material that are interesting and relevant."

Connecting Around the World
The five BB&N students who first became part of that network report that their experiences lived up to the program's intent. Just as Cierra was drawn to the Medical Problem Solving class because of her interest in biology and desire to delve deeper into the subject than she could at BB&N, Jaya Aiyer '15 chose to take Human Rights and Genocide to satisfy her need to know more about some of the world's more disturbing events. "At BB&N we have a lot of opportunities to study specific subjects, but learning a history this specific is so rare. I got to learn all these amazing pieces of history that are dark and heart-breaking in some cases," Jaya said, "but they're the things that fascinate me the most: the motives behind people wanting to destroy an entire culture, the reasons that people go against each other, and how colonial empires got very established civilizations to hate each other."

Jaya appreciated, too, that she could watch the acclaimed movie Hotel Rwanda, for instance, at times that worked best for her schedule. "I really liked the format—it's more like a college course; there are deadlines, but I can do the work at my own pace." This flexibility also appealed to Adon, who said, "You get to be active in the class when you want to." He's a fan of the asynchronous online discussion, which, he said, allows him more time than a 45-minute class to fully consider his, as well as his classmates', views on a subject. In addition to discussing topics by posting their comments and responses to one another, GOA students also talk in whole-class or small-group Skype sessions and collaborate on Google docs.

A defining element of the GOA experience, of course, is that opportunity to connect with students around the world. A discussion about the Second Amendment and gun laws with a student from Texas, for instance, helped Adon realize that "our opinions, to some extent, are a function of the different communities in which we have grown up, surrounded by different popular perspectives. I appreciated those opposing arguments and debates." Logistics pose some challenges for real-time communication, but even that awareness is eye-opening. "There's a single sweet spot," said Adon, "when it's early enough in the morning for me and late enough in the afternoon for Hong Kong, so that was able to work just swell." Jaya found that "even if you don't see their faces, you can hear their ideas through working on the same document or emailing." Cierra became particularly close to a group she worked with on one case and now chats with them on Facebook. While she, too, enjoyed the flexibility afforded by attending class from home on a Sunday, for example, she discovered its potentially embarrassing downside. "When we have Skypes, I put on a nice shirt and my pajama bottoms. One time I stood up, and I was wearing cheetah-print pajama bottoms, and I was like, 'Oh no! I need to sit back down—NOW!'"

But Cierra found that the benefits of becoming technologically savvy far outweighed those dangers. "I've had to interact with a lot of different people through a screen, which can sometimes be really difficult. I know that colleges are using online courses, and a lot of business is done that way, so my familiarity should help me."

Just as significantly, the students realized their efforts have rewarded them with valuable life skills. Adon noticed that he was becoming even more responsible and independent. "There's no one to say, 'Hey—you've got to do this assignment right now.' So, I had to depend on myself to know when I needed to do something. It's rewarding to know I can do that." Cierra identified self-motivation, organization, and time management as skills necessary to her success in the online course.

Not surprisingly, those skills dovetail with qualities—enthusiasm, resiliency, diligence—sought in students applying to take a GOA course. As BB&N's site director, history teacher Lizanne Moynihan registers students and oversees their GOA experiences. In this first year, only seniors can apply to take a GOA course and only as a sixth class, and they must be enrolled simultaneously in a history or science course here. "The GOA class is meant to complement what they're already doing here, which will always take precedence," says Moynihan. "It's lovely for me to see some seniors with an interest and a passion and a will to go beyond BB&N have the chance to immerse themselves like this."

As Cierra and Jaya move on to second GOA courses starting in late January, they'll be joined by five other seniors in such courses as Advocacy and Gender Studies. If the pilot group's experience is any guide, the students' views of the world around them, as well as of themselves, should prove enlightening. Christina Stellwagen '15, a BB&N lifer, is about to start a class in Bioethics with students from as far away as Jordan and Japan. "In Cambridge, Massachusetts, people tend to have the same liberal outlook. I love this community, but I'm super excited to have the opportunity to go outside of it," she says. Fascinated by the subject matter, Christina anticipates that it will promote "some clash of opinions, which will be really interesting. I'll get to see other viewpoints and maybe become more empathetic along the way—it'll be cool."