“Only two brief paragraphs are devoted to Frederick Douglass’s encounter with abolitionists in his new career as a public speaker for the cause of abolition,” says English teacher Sarah Getchell to her AP English 11 class. “We’ve talked about this as a rhetorical text, intended to persuade its readers. Why, from a rhetorical standpoint, would he choose to end his Narrative as he does?”

Thomas Sheft ’22 responds, “We get that the abolitionist work he did was very impressive, but I think if he talked about it more, it would kind of force it too much.”

“Yes, it would end on a didactic note,” continues Getchell. “Instead, this avoids telling us what to think and is maybe actually more powerful as a result, and it ends this really compelling story with a vision of what America could be in the description of New Bedford at the time.”

In many ways, it’s a typical English class, but this one is happening outdoors, masked students sitting distantly in Crazy Creek chairs they will later swab with disinfectant wipes, their masked teacher perched apart on the brick steps of the imposing Pechet House. Still, the essentials of engagement with a text and with one another have mostly endured, despite the restrictions on both teachers and students in the time of COVID-19. 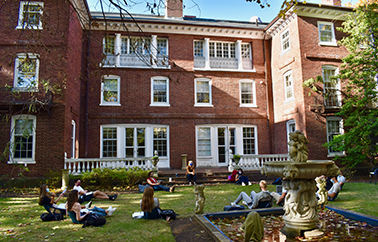 Although Getchell is one of several faculty teaching all of their classes remotely, she managed this fall, aided by the mercifully mild weather, to be on campus a couple of days a week after she scoped out the Pechet property, an out-of-the-way locale she felt safe in. Especially as she was getting to know them early on, Getchell has valued the time she could have in person with her students, though she misses the casual contact that comes with being able to wander around campus, with conferencing and chatting during free blocks.

Nico Berger ’22 notes, “the classes that we were able to have by the mansion were very nice for getting some fresh air in a time that is very much centered inside, as well as for collaboration with my peers.”

Even when they’re in an online class, though, Nico feels that Getchell keeps the students engaged. “Her discussion-based lesson plans provide every student with opportunities to participate and stay focused,” he says. He also appreciates that her assignments link literature and the world around him. For instance, to end the term, Nico later explains, “we’re writing a piece on 2020 and how it relates to race-related issues that James Baldwin wrote about.”

Getchell has also always linked her English 12: Law, Literature, and Social Justice class to current cultural issues, and “this year the course has felt particularly relevant,” she says. “It seems that everyone has already had a primer in talking about identity and the law; it’s felt less theoretical, more urgent, and the students have stronger opinions than in past years.”

Samirah Moody ’21 says, “This class is providing a space for students with varying beliefs to sit and discuss concrete legal theory and more interpersonal matters like the protests and events of the summer. This class feels necessary in a time when our political culture is riddled with strife.”

Augmenting her class’s thought-provoking discussions about engaging readings and podcasts, Getchell would ideally, as in years past, take her students to visit two courts and talk with the judges, and a diverse array of outside speakers could come into her class to discuss “ways in which the law and various actors in the law are working to make MA and the world beyond more equitable,” says Getchell. While the in-person visits weren’t possible this year, Getchell still lined up a robust online series of experts to speak with her students about the legal system and opportunities for students to get involved.

“There’s a lot of value in hearing the different perspectives and experiences of people who make an impact on how our criminal justice system is run,” said Ruthie Osagie ’21. “Even though it’s on Zoom, I appreciate hearing about the work that these people do!”

The class has had an online visit with Mainon Schwartz, a legislative attorney with the Congressional Research Service in Washington, D.C., who advises various groups about Native American rights, among other issues, and Getchell soon will host an attorney from the Equal Justice Initiative, Bryan Stevenson’s organization.

When First Justice of the Cambridge District Court Roanne Sragow Licht P’12, ’17 joined an online Law and Lit class, the students learned about her hugely successful special courts, focusing on rehabilitation rather than prosecution of people with mental health and drug issues. Jack Lichtenberger ’21 was dismayed to hear, he says, that “Judge Sragow’s mental health court was shut down recently because of budget cuts, which unfortunately shows us where our local government’s priorities are.”

As steeped as the seniors are in current issues, Getchell’s English 9 students are immersed in the 2,800-year-old tale of Homer’s Odyssey, in Emily Wilson’s 2018 translation, to be exact, the first in English by a woman. From the big TV screen in a large science lab now housing a grid of amply spaced desks, Getchell looks out at students raising their hands. “What else? Hadley?”

“It seems like Athena made Odysseus look like a god; that’s why Telemakos doubts that Odysseus is his father when he first encounters him,” says Hadley Earl ’24.

“This is a big moment—he’s meeting his dad for the first time, and vice versa,” says Getchell. “What finally convinces Telemakos that his father has returned and stands before him? Take a couple minutes, turn and talk with your partner, and we’ll reconvene.”

Student voices are usually picked up well enough by a laptop operated by Carly Chelton, the Knight Corps member who stands in for Getchell when the students are in the classroom. Sometimes Chelton places an Anker conference speaker on a chair to amplify student voices at the back of the room. That classic hand-raised, “pick-me” lean toward Getchell, even when she’s an oversized head on a screen, indicates how the students have adapted to this arrangement. 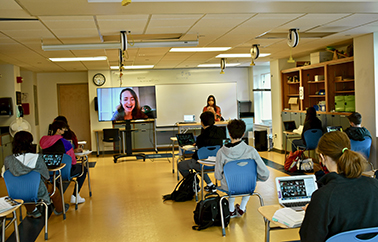 “To me, it feels just like a normal class when raising my hand or asking Ms. Getchell a question while she is on Zoom,” says Tyler Blum ’24, “because she has incorporated many ways for the students in school to still interact and collaboratively learn with one another. Her passion for teaching allows us to feel like it is a normal day in school even though it may be a little different.”

Getchell acknowledges that teaching remotely and in person has presented hurdles, both technological and interpersonal, she’s had to overcome. “Connecting via Zoom and through masks was difficult at first, but I’ve been so impressed by the students’ enthusiasm and dogged engagement with the material we’ve read and discussed,” she said. “I miss sitting around a Harkness table, but we’ve managed to have some of the most illuminating discussions that I’ve ever experienced about all of our major texts, including challenging reads such as The Odyssey, The Fire Next Time, and Just Mercy. Even when we’re not together, our connection through ideas and discourse seems as strong as ever.”

Some things, blessedly, like that connection, are pandemic proof. Packing up their bags and filing past the big screen, Getchell’s freshmen say “thank you” to her as they leave.