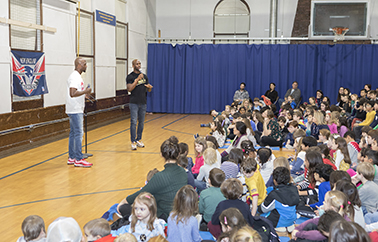 Lower School students were thrilled this week when brothers Devin and Jason McCourty stopped by BB&N for a surprise visit. Every bit as polished as their Super Bowl rings from 2019, the twin defensive backs for the New England Patriots brought humor and sound advice to an assembly that held students in rapt attention.

During their presentation, the McCourtys championed their charitable work in the fight against sickle cell anemia, a disease that has affected members of their family and has become a passion of theirs since their football careers allowed them a platform from which to make a difference. The brothers also touched on a variety of general topics based off of questions from fourth grader Henry Carroll, whose mother Bronwen helped arrange the visit through her work in sickle cell research.

Citing their work with sickle cell, both Devin and Jason stressed the importance of "using your voice" to make the world better. "You don't have to be famous, and it doesn't have to be a giant cause," Devin explained to students. "It can be something as small as telling a friend to do the right thing, or pointing out when someone is doing something they shouldn't be doing."

Playing off of that topic, Jason talked about the importance of learning from mistakes and taking time to make the right decisions in life. "The popular thing is not always right, stay true to yourself and take the time to make the right decision for you." He even joked that this was something he may or may not have learned when he signed with the Cleveland Browns two years ago and endured a season in which the team lost every game. "I told Jason not to do that, but he didn't listen!" joked Devin.

Both McCourtys went to great lengths to relate to students on their own terms, acknowledging that becoming a football player requires some skills and attributes that you need to be born with, but stressing how they aren't that different from BB&N students. "Remember, when you guys are sitting in your classrooms, we are doing the exact same thing...going to meetings, studying game plans and opposing teams. We work really hard to have that fun game on Sunday."

They also noted how important studying and listening are in achieving your goals. "If we didn't get As or Bs in school, out mother wouldn't let us play sports or video games," noted Devin. "And eating right and playing, any sort of physical activity, is so important to being healthy."

When asked what advice they would give kids growing up today, neither Jason nor Devin hesitated in their answer, one they both agreed on: "Get to know yourself and learn what makes you happy. Talk to your parents and friends about how you're feeling, what's going well, and what's not going well...that's how you learn about yourself and start to realize what goals you want to achieve."

The brothers closed their visit with a few classrooms stops to partake in some learning activities and answer more questions. If most BB&N Lower Schooler's weren't already fans of the Patriots, they certainly are now—or at least fans of the McCourty brothers!