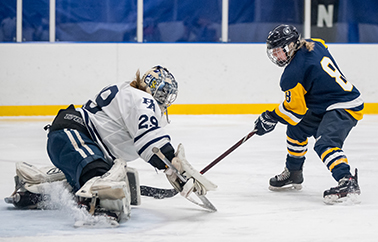 Placing a capstone on her stellar BB&N career, recent graduate Molly Griffin ’20 was awarded a John Carlton Memorial Trophy from the Boston Bruins’ organization this June.

Given annually by the Bruins to the outstanding male and female student athletes in Massachusetts, the trophies are bestowed upon high school seniors “who combine exceptional hockey skills with academic excellence.” The annual awards are named in honor of the late Bruins scout and administrator who passed away in December 1982 after a long and dedicated affiliation at all levels of the game.

Griffin finished her high school career as BB&N’s second all-time leading scorer, posting 79 goals and 66 assists for 145 points over her five years playing varsity ice hockey. This season, she tallied 19 goals and 11 assists to help BB&N finish the season as the third-ranked team in New England with a program-best 22 wins. Griffin plans to attend Northeastern University in the fall of 2020.

“Since the day I met Molly she has been the kindest and most welcoming person in our locker room,” Girls Varsity Hockey Coach Ed Bourget ’96 says. “She is aware of her surroundings and understands how to implement a positive team dynamic that allows all of her teammates to play the game of hockey with confidence.”

“Since seventh grade, Molly has been the most talented hockey player on our team. Her quiet leadership and willingness to involve teammates in the game plan have helped her reach the elite level of the game.”