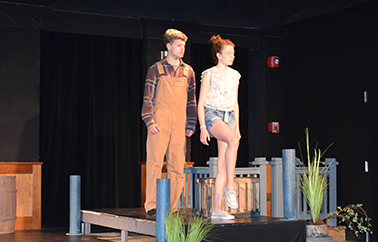 BB&N Middle School students cleaned up at last month's Middle School Drama Festival at the Cameron Middle School in Framingham. Performing along with seven other area schools, BB&N eighth graders were awarded a gold medal in the festival for their production of The K of D, an Urban Legend. In addition to taking home the gold, the students also received five individual awards for excellence in acting, music, and sound design.

Written by Laura Schellhardt, The K of D tells the story of Charlotte McGraw, a lonely girl whose loses her voice following her twin brother's death in a car accident. As her brother expires in her arms, he kisses her and bestows on her a unique power—anything she kisses also dies, or so the townsfolk come to believe. The story grapples with Charlotte's and the town's coming to grips with the tragedy, and explores the subtle line between reality and legend.

For a photo gallery of the production, click here.

The following students were awarded for excellence in their performances: