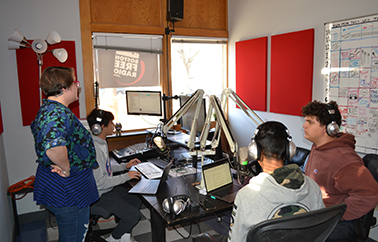 Sitting in front of a Behringer B-1 microphone in the front studio of Boston Free Radio (BFR) in Somerville, MA, Julio Martinez ’24 is anxious.

“How do you do this every day?” he asks BFR manager Heather McCormack, “I’m like so scared.”  Martinez’s BB&N eighth grade classmates Nic Matosic and Thomas Angelone are in similar states—you can tell by the way they nervously adjust their microphones and fiddle with the studio headphones perched atop their heads.

In 30 seconds, these three members of Middle School music teacher Kathi Gellar’s History of Rock ‘n’ Roll class will be DJ’ing their own music program, broadcasting it live into the Somerville, Boston, and beyond.

The exciting (and nerve-wracking!) experience was part of a field trip to the Somerville Media Center, a non-profit broadcast studio that produces community cable shows, podcasts, internet radio, and many other media ventures.

The idea came to Gellar through Candie Sanderson, BB&N's Community Outreach and Engagement Specialist. “Kathi had reached out to me about wanting to do a project for her class,” Sanderson says. “I did some digging around locally, then connected her to Boston Free Radio, through my advisee Simru Sonmez-Erbil '20.”

Simru, a BB&N senior, hosts a weekly show at Boston Free Radio, the radio arm of Somerville Media Center. Thinking it would be a fun, interactive way to engage in a medium that shaped rock ‘n’ roll and American culture, Gellar reached out to Heather McCormack, the manager at BFR to set up the visit.

“Heather presented some radio history and spoke about how radio helped to spread rock around the country, influence culture, and create an industry avenue for musicians. We then set up a project where the kids could create their own 10 to 15-minute radio shows to broadcast live,” says Gellar.

Working both solo, and in groups, the seven members of Gellar’s class built out three different shows to broadcast during their visit, and were thrilled at the opportunity. Whether eagerly planning set lists, choosing DJ names, or learning about the significance radio as a medium, the work felt more like fun.

The project was such a success that Gellar is arranging for two more field trips next semester. Stay tuned for more broadcasts from up and coming BB&N DJs in the future. 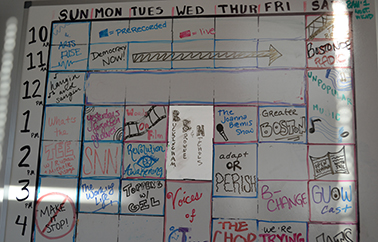