When Middle School librarian Christina Dominique-Pierre pitched the idea of hosting a "Media Lunch" once a week in the Middle School learning commons, she wasn't certain how students would respond, but she was hopeful.

"The idea was to create an opportunity for students to take in media—shorts films, podcasts, TED Talks—and digest not just the content, but understand how media affects us and shapes our opinions...and also realize just how prevalent media is in our lives. The idea was to create a jumping off point for discussion, and ideally, to make students realize they can have advocacy and a voice themselves through media."

When Dominique-Pierre prepared for the first lunch, in November, she aired the Oscar-nominated short film Hair Love, and about five students showed up. Flash forward to the most recent Media Lunch, and the scene is decidedly different.

More than 25 seventh and eighth graders vie for seats around the table as Dominique-Pierre queues up the Oscar-winning film by Kobe Bryant, Dear Basketball—a prescient choice given the tragic, recent death of Bryant. Although there is excited conversation as students settle in, once the film begins, everyone eats silently, taking in the film and munching on their lunches.

"This film was dedicated by Kobe Bryant to his father, but also to any child who aspires to be like their parents. If you had to dedicate a short film to someone, who would you dedicate it to, and why?" asks Dominique-Pierre following the showing.

Arms shoot up, and discussion begins. Dominique-Pierre also uses the film as a segue into Black History Month, pointing out that Kobe Bryant chose his jersey number, 24, as an homage to Jackie Robinson's number 42. Again, hands shoot up, and more conversation begins.

With help from Wendy Wunder, technology integration mentor at the Middle School, Dominique-Pierre now has the program running smoothly every Monday, and has begun soliciting suggestions from other faculty and students. A showing early on of The Art of Misdirection, a Ted Talk by a famous pickpocket, "went viral" on the campus according to Dominique-Pierre. "Kids were talking about it all week, re-watching it on their own, and it caused quite a buzz...that was when I knew we were on to something."

Beyond the content of the media, discussions also center on how media is being used, how it can be used properly, and the impact it will have on society (specifically kids) moving forward. "It's an important topic to tackle because this is how our students digest culture and current events," Dominique-Pierre says. "If they have a better understanding of how it works, it will serve then well as both consumers and users." 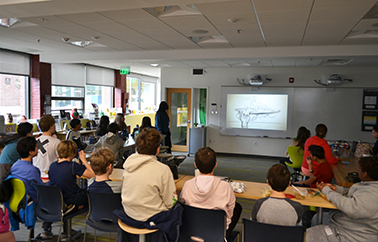