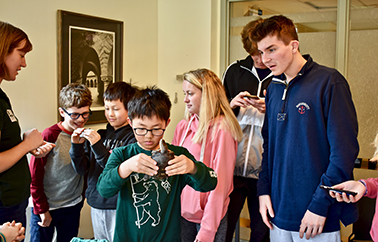 Speaking before an informative poster about global warming and a display of houseplants, Victoria Lassikas '25 was a girl on a green mission.

"We thought this project was a great way to inform people about the environment, to motivate them to get involved," Victoria said. "Even if they're only maybe eight or nine, they can still do something; they can still make an impact."

Victoria was part of a fifth- and sixth-grade delegation, all members of the Lower School's Environmental Initiative Club, who manned booths and impressively dispensed information, along with a healthy dose of passionate advocacy, at the Upper School's Eco Bash, a day devoted to learning about sustainability, climate change, and green initiatives. Additionally, 40 fourth-graders participated in a round of workshops.

"We hope that, by browsing various booths, listening to a knowledgeable speaker, and attending workshops led by students, faculty, and parents, all students left the day with a greater understanding of why everyone should care about the state of the Earth and our impact on it," said Upper School English teacher Ariel Duddy, co-advisor of the Eco Reps and co-organizer of the Bash.

The 10 Lower School project presenters were happy to be included in the Upper School event. "I like to share what we've done at the Lower School just to give them an idea of what's going on there," Ethan Miner '25 said. "It's a lot of fun for me, and it's good to share with them, so it's a good experience."

Participating in the Eco Bash afforded Victoria a sense of common commitment with her older schoolmates. "It's really cool because I can see what the Upper School has been doing in terms of environmental concerns and educating people about our carbon footprint and how to reduce it," she said.

As part of their club activities, Victoria and Max Laibson '25 came up with a plan, which they will soon present to Lower School Director Anthony Reppucci, to add more greenery to BB&N's classrooms and grounds. Speaking to Sofia Chen '22 and Dunia Sarkis '22, Max explained, "Outdoor plants encourage native wildlife such as hummingbirds in the summer and bees and butterflies to pollinate and keep up the natural ecosystem." He went on to describe plants' role in lowering dangerous CO2 levels in the atmosphere.

"Are there specific plants that help?" Dunia asked, pointing to the display. "Are those the types you're talking about?"

"Victoria can tell you more about the plants," Max replied.

"These are spider plants, which are low-maintenance houseplants or classroom plants. All you really need is a window that's sunny, and you have to water them every few days," Victoria said. "We have some plants at school, but most of them are on the verge of death," she continued with a laugh. "We think it's important that we try to sustain them and care for them. That helps us be more aware of the environment."

In the next booths over, while Penelope Quilter-Vagts '26 and Upper School Science teacher Michael Chapman were discussing the wind turbine prototypes, which, along with a solar-panel plan, she and others designed for the LS, Ethan was telling some Upper School students about the repurposed bicycle before them, reconfigured two years ago in Science teacher Maria Elena Derrien's class. "We removed the tire of the back wheel and put a belt over it. With the motor spinning backwards, it basically acts as a generator, so we're using it to generate electricity," he said. "Our long-term plans are to attach this to an inverter and store the electricity in a battery. Currently, we have a voltmeter to show how much electricity you're producing." 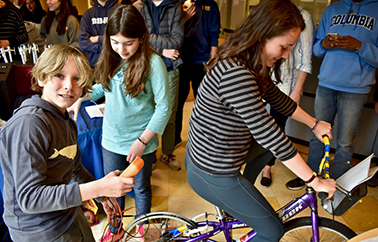 Nola Clancy '20 knew a cue when she heard one, hopped on the bike, and started pedaling.

"Thirty volts, Nola! That's pretty good," Derrien said. "But can you light the light bulb—that is the question! You need to go consistently fast."

As Nola whirred way, Derrien called "Faster, faster, faster!" and then asked Ethan, watching the attached light bulb, "Do you have the light?"

"Eco Bash gave the Lower School students a great opportunity to share their ideas with the greater community and to hear the feedback that people found these projects interesting and important," said Fourth-Grade Homeroom teacher Christina DelloRusso, who advises the Environmental Initiative Club. "It validates them as learners and inspires them to continue to tackle challenging topics and effect change, both at BB&N and beyond."

DelloRusso praised the highly motivated and capable team of students, who collaborated well by brainstorming and helping each other edit the written components of the projects. "I was there to support and advise, but the students were completely in charge of the various projects," she said. "It is so important for me to help my students see that all their hard work and knowledge can serve a greater purpose in our world. I think they were able to speak so clearly and in such depth because they are passionate about these projects."

Not to be outdone by the energy of their Lower School peers, the fourth-graders attending one set of workshops were fully engaged, curious, and unfazed by the relative giants sharing the space with them. Jack Williams '27 seemed eager for a rematch with the Upper Schoolers after attending a workshop called Are You a Smarter Recycler Than a 5th-Grader? "We learned a lot about composting, recycling, and landfills," he said. "They destroyed us in trivia, though."

Klara Kuemmerle '19, co-leader of a workshop called DIY Hygiene Products, said she worried at first that dealing with the age difference in the group might be challenging, "but the younger kids were incredibly engaged and excited about making their products. One boy had a great time picking out his favorite essential oils for his body spray, and others were eagerly mixing ingredients for their body wash." In addition to seeing the benefits of exposing the Lower Schoolers to what they might experience in the Upper School, Klara also noted the boon for the older students. "I think the older kids can learn how to exercise leadership skills while managing all these kids, helping the older students, running to the bathroom for paper towels, and trying not to make a great mess of things," she said. "All in all, it was a fantastic experience!"

After the four fourth-graders in Grassroots Wildlife Conservation: Meet New England Wildlife offered most of the answers to facilitator Emilie Wilder's questions, junior Jake Berger said to the Lower Schoolers on his way out, "You guys are smart."

The compliment further validated the collaboration between BB&N's older and younger grade levels, and throughout the event, it was clear that the feelings were mutual.

"It was fun to learn things with sophomores and juniors, people who are six or seven years older," noted fourth-grader Rami Rouayheb Klemencic. The cross-pollination of ideas and camaraderie across campuses enhanced the day's message that a united effort can, indeed, effect environmental change.