When Lower School music teacher Sara Zur began recording students' songs with her iPad two years ago, she envisioned a fun project that would allow Lower Schoolers to listen to each other's music. But what began as a little idea gained traction quickly, and Zur began to think big—internationally big. Two years later, Zur has created "BB&N Radio," featuring songs being heard beyond the border. Read below for an account by Zur of the exciting project. 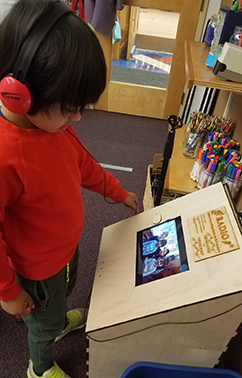 In October 2018, I stood outside on the playground with a microphone and a sign that said "BB&N Radio." The mic was attached to my iPad. I explained to Lower School students that they could sing a song, and I would record it for our "Radio." They could invent something on the spot or practice a song first, but it had to be an original creation. Little by little, students (ages 4-8) came up to the mic to sing. In May 2019, I created a "Listening Station," which allowed students, parents, and teachers to listen to the invented songs. Students loved it. Brigid, age 4, said, "I was really scared, and my legs shook in the beginning. But then I felt good."  Elliot, age 5, enjoyed hearing what his classmates had created. "I liked listening to some of the songs. Some of them are very funny."

I teach grades B-2 music at the BB&N Lower School and have been studying young children's informal invented songs for a number of years. Once I started collecting BB&N students' songs, I began to imagine collaborating with an international school because I thought it would be interesting to see how students react to songs that other children make, and I wanted to students to feel like their songs were being heard by a wider audience. I also thought that students might eventually collaborate in composing songs together across the two schools and two cultures. Karina Baum, our Director of Global Education, helped me set up an invitation for other Round Square schools to collaborate with us on this project. Ea-Ling Seun responded. Ea-Ling teaches music to grades 1 and 2 at the Bayview Independent School in Toronto, Canada.

Ea-Ling and I exchanged several emails about how to proceed. We set up a shared Google photo album to collect songs that our students would invent, as well as a shared Google Doc where we could record comments. It was fun to read what her students felt about the young BB&N students' compositions:

I continue to integrate the "Radio Project" into my own curriculum and usually leave time at the end of each class to ask if anyone has a song to sing. Sometimes groups of students will find me and say, "Sara! We have a song to sing! When can we put it on the radio?" Looking forward, I hope to use these invented songs to teach students about song structure and song-writing skills. I might even use some songs for our upcoming spring concert in May. And, to extend the momentum of global outreach, I plan to present this project at the International Seminar of Music Education (ISME) in Finland this coming July.