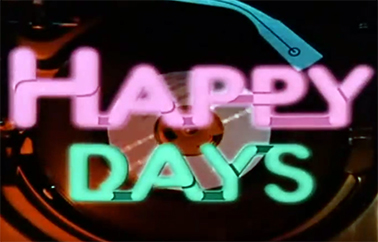 "A 'challenge' would be building an economy that's not dependent on war production," says Claire Pingitore '20.

"Anyone want to piggyback on that point?" asks History and Social Sciences teacher Lizanne Moynihan, who is setting up the 1950s unit by having her U.S. History students reflect on "opportunities and challenges" facing the United States in the immediate post-WWII years. Projected on the screen, a world map depicts colonial territories and areas then under Soviet influence. Students have already raised foreign-affairs issues such as tension among the Allies, the fear of Communism's spread, and decolonization, and now Moynihan has asked them to focus on the domestic arena.

Mia Bawendi '20 offers, "The role of the government—whether it's active or not active, whether they go the laissez-faire route or the government gets really involved and provides people with opportunities."

"All the soldiers were coming back," says Meredith Green '20, "so what happens to all the people—women and African Americans—who took factory jobs in place of the soldiers who went away."

"The war would probably end with those marginalized groups expecting more rights after spending so much time fighting for the United States and for democracy," says Eve Fantozzi '20.

"Excellent point," Moynihan says. "Here we were fighting the evils of Fascism, and then African American soldiers come home and they realize—they don't realize, it's further confirmed—that they live in a very unjust society themselves."

Talia Mirel '20 adds, "I keep thinking about France; they're in a tough situation and maybe they need some help. Maybe America could step in there."

"Hold that thought," says Moynihan, flashing a smile and the Irish twinkle in her eye, "because we're going to look at an important plan next week. But you're absolutely right—we solidify alliances now in a post-World-War world."

As an Irishwoman who moved to the U.S. 13 years ago and is now in her sixth year at BB&N, Moynihan suggests that she's well suited to "look at U.S. history from an outsider's perspective—that is, to model critical skepticism for the students." With a hearty laugh, she adds, "Plus, the accent keeps them amused."

Moynihan's primary goal of getting her students to question the material has benefits that are not lost on her students. Julian Li '20 notes, "I think Ms. Moynihan does a really good job of creating an engaging classroom atmosphere. She asks a lot of questions to have us draw our own conclusions about what events might mean, what they might lead to, how things are connected. I think that helps us form a better understanding not just of the events but of why they're happening."

The U.S. History curriculum, by design, asks students to form their own conclusions after doing close reads of primary sources, compiled on a companion website along with, as Moynihan puts it, "lots of really good, juicy secondary sources that often convey competing interpretations." In place of one of those hefty doorstopper textbooks, students also read the "narrative," a thematically focused, distilled overview of American history in 11 units, written five years ago by department members. "Even the fact that we decided to write our own textbook," says Moynihan, "is in itself a great message to the students that they have to be critical and look at things skeptically."

In a nutshell, as Julian says, "Ms. Moynihan is guiding us to become our own historians."

Reading from primary sources, Eve notes, "makes you consider that history is made up of real people, that these things actually happened. It makes you put yourself in the person's shoes and brings empathy into it; you're not just memorizing something."

In addition to the critical reading and thinking skills students are developing, Claire says, "I think I'm now aware more of tone and who the audience is—and isn't."

The class goes on to consider a political cartoon depicting Truman, embodying presidential authority, being fitted with a boot, representing Congress, that feels too small. Summarizing Truman's Fair Deal, Moynihan prompts students to realize that there's post-war resistance to an active government involved with healthcare, expanding social security, and increasing the minimum wage. "This tees up our 1950s unit," says Moynihan. "The '50s is often seen as a golden age, a simpler, happier era, but we're going to interrogate that notion. When you think of the 1950s, what comes to mind?"

The students readily voice ideas that build on one another—poodle skirts, Grease, conservative values, nuclear families, uniform suburbs, the rise of a white middle class—before Moynihan asks the class to consider the image of the '50s portrayed in the opening of the TV sitcom Happy Days. After watching the clip, students note the white, Christian family praying at the dinner table, the absence of anyone who is not white, women in the roles only of cheerleaders and mothers.

Eve says, "The letterman jackets—it seemed there was a herd of boys exhibiting strength and dominance over a community in their school."

"I like what Eve is saying," Moynihan says, "about this more masculine culture."

Sylvia Murphy '20 points out, "Everyone is matching. In Grease, too, they all have matching jackets—the two groups."

"Can we put a word to the idea of everybody kind of acting the same?" asks Moynihan.

Moynihan nods. "In this 1950s world, where Americans are rejecting the idea of Communism and the image of Communist countries—everybody has to be the same, you don't get to have individual thoughts—the '50s in the U.S. is actually a lot about conformity."

With these images and ideas hovering in the air, Moynihan hands out packets of 1950s advertisements to pairs of students and asks them to exercise their collaboration skills and examine each ad's approach, the values it emphasizes. "Then, really importantly—dig into this one—what are the implied ideas about gender, class, family, race? Think about who is or isn't in the ad, how they're portrayed, and how the portrayal might connect to the time period," she says. "Okay, let's knock heads."

"I like that we try to situate ourselves in the times of whatever it is we're studying," says Julian, "and try to understand why something in those posters or radio ads that now may seem completely ridiculous or foreign made sense at that time. It helps us as historians construct what things were like at that time, and that's valuable." 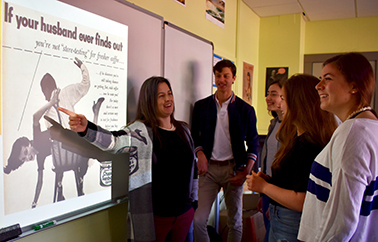 Austin Cohen '20 eyes an ad depicting a wife being spanked by her husband because she failed to buy the preferred coffee. He says to his partner, "This is hard to look at."

Studying an ad for aluminum screw-tops for bottles that claims "a woman can open it—easily," Etienne Aust '20 replies, "This is almost worse: 'You don't even need your husband.' That's amazing."

Listening in, Moynihan says, "Remember the secondary source we read, ‘The Parable of the Democracy of Goods.’ Can you think of any connections to that one?"

"It's kind of weird because this ideology has been maintained throughout the 40 years since those ads we saw from the 1910s," says Etienne. "Some people thought that would change, like with Rosie the Riveter in the '40s. We find this super appalling now, but back then, this was normalized."

In the bigger-group discussion that follows, Sylvia notes about the coffee ad, "It seems like satire. It's so dramatic because it's assuming that everyone has a husband who beats them, and it's appealing to women who are scared of their husbands, but it's not really defending them in any way."

"Let's go in a little more," Moynihan urges. "If it's satirizing domestic violence, what statement can we make about the prevailing culture?"

Maya Mangiafico '20 says, "That there was domestic violence in most households. And it was socially acceptable."

After the students note that the ads target women, who are doing most of the buying as part of their domestic duties, and that they depict no people of color except for one in a horribly stereotyped, derogatory way, Moynihan asks if the '50s really were those 'happy days' that were better than today.

"I'm thinking of the play we saw about Brown v. Board of Education," says Eve. "If I didn't have exposure to that and to this course right now, I probably would have said the '50s were better."

Reflecting later, Moynihan says, "Doing this myth-busting with students is a really fun part of my job." When students are open to ambiguity and other perspectives, readjust their views after some critical questioning, ­­or even "leave class scratching their heads, saying 'I need to find out more before I make up my mind,'" Moynihan notes, "well—to me, that's success."