As the members of BB&N's Kindergarten North classroom filed into the Upper School theater late last month, the excitement on their wide-eyed faces was palpable; weeks of hard work were about to pay off with a little help from some upper classmen.

Working in groups throughout the month to craft a series of short stories, the Kindergarteners now had the opportunity to watch their tales come to life on stage under the masterful direction of Upper School theater teacher Mark Lindberg, and four Upper School students: Seamus Doyle '21, Julian Li '20, Ruthie Osagie '21, and Andrew Zhao '21.

Kindergarten teachers Maya Stiles-Royall '04 and Maia McPherson '04 were thrilled to see the collaboration come together. "We had been interested in having some cross-campus connection work. Both being alums of the school, Maya and I frequently would remark on certain faculty that were still around from our days as students," McPherson says. "Curriculum-wise, we wanted to find an audience for our students' story writing beyond themselves and their families. It felt important to enable the children to see their stories come alive...and theatre was a great avenue for that." 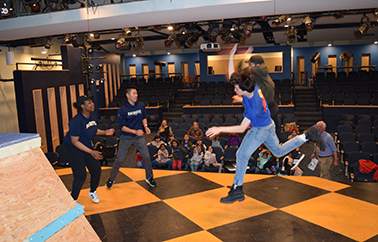 And what rich material these kindergartners brought to the stage for their older colleagues to work with. Boasting titles such as It's a Magical Volcano World, and Space Explorers, the stories transported the Upper School theater students to a volcano kingdom, the outer reaches of space, and even tasked them with acting out a tornado sweeping people up and swirling them to a luxury hotel in Palm Beach, Florida.

"My favorite part of the collaboration was being able to put the kids' stories together to make them smile," says sophomore Ruthie Osagie. "I loved seeing the looks on their faces when we put their skits together! They had some very unique characters, and I believe we tried our hardest to act them to the best of our ability."

From the reactions of the Kindergartners, Osagie and her peers came through in spades. There were "oohs" and "aahs," laughter, and even some audience participation from the Lower Schoolers, who relished their chance to work with the "big kids."

McPherson described her students' reaction as one of "utter joy!"

"They were empowered by seeing their stories understood and interpreted by other people—and they loved interacting with the upper school students and giving them feedback and advice on their improvisations," McPherson says. "Watching teenagers seriously commit to a performance of mermaids, tornados, and volcano eruptions was simply amazing."

Click here for a photo gallery, and see below for video of the fun.