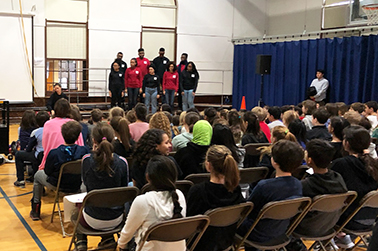 This year's Martin Luther King Jr. Assembly at the Lower School was an especially memorable one. Opening the assembly in the LS gym were the amazing, world-renowned Kuumba Singers, who paid a special visit from down the road at Harvard University.

Earlier in the year, Lower School music teacher Greg Fernandes had written a letter to the group, inviting them to visit the campus. When they agreed to come for the MLK assembly, he knew that it would be a very meaningful occasion, as the Kuumba Singers had been founded by two African-American students at Harvard in 1970 in response to Dr. King's assassination two years prior.

"The MLK assembly at the Lower School has come a long way in recent years," says Fernandes, "and we want to get better every year and get more kids involved."

Those two goals were certainly met at this year's assembly. Following the performance by the Kumbaa Singers (see clip below), which prompted a schoowide clap-along, the assembly continued with: