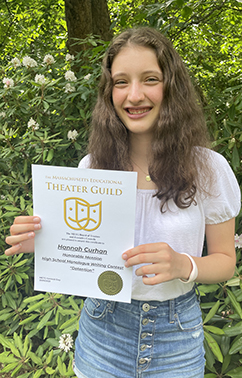 Even as a sophomore, Hannah Curhan ’23 still benefited from the mentorship of her Middle School Drama Teacher, Ms. Crewdon. During the winter, Crewdon showed Curhan an email from the METG (Massachusetts Educational Theater Guild), calling for submissions to its first-ever monologue contest. With Crewdson’s encouragement and US Theater Director, Mr. McDonald, serving as her sponsoring teacher, Curhan entered the contest with her monologue, Detention and was awarded Honorable Mention by a panel of playwrights. Curhan was one of only five high schoolers across the state to be given Honorable Mention.

The monologue is from the point of view of a middle school girl who receives a detention for a dress-code violation and tries to convince the teacher who gave her the detention to repeal it. “I got the idea originally when I was thinking about how unfair dress codes are, especially to girls, and I imagined that if I got a detention for dress code that involved writing an essay, I could rant about how sexist dress codes are,” she explained.

Hannah had previously attended a METG monologue workshop that helped her write the piece. “The author teaching the lesson explained the usefulness of writing a monologue in which the character is trying to convince someone of something or to get something from them,” she shared. “This way, the monologue isn't too repetitive, and it's easier for the mood to change instead of it being one monotone paragraph. With this advice in mind, I decided to change the premise of my monologue to a girl trying to get out of detention, instead of just protesting against its unfairness.”

While the first draft took only an hour to write, Curhan did a lot of reading out loud to hone her entry. “When I first wrote the monologue, I used too many stage cues and emphasized words (in italics or in all caps) because I had written it as if I were performing it, so I had to edit most of those out,” she said. “I read it to a few friends and family members and made a few small adjustments before finally submitting it.”

Creative writing is one of Hannah’s passions and she appreciates that BB&N offers opportunities to write fiction in its regular English classes. “I love any excuse to write something made-up! I enjoy writing fiction so much because I love to just sit down and write without having to stop to check my sources or stick to a pre-decided plot,” she said. “In English class this year, I enjoyed writing a fictional short-story, a few poems, and a musical script!”