Science teacher Michael Chapman stands before an iPad mounted on a tripod and speaks to his four Honors Chemistry students doing today’s lab remotely—three at home and one, an on-campus senior, who Zooms in to this class of junior-cohort students.

“I heard lots of joy, so I assume you saw something happen?” he asks.

Hearing their remote classmate, several in-person students call out in quick succession: “I’ve got two reactions so far!” “I’ve got one!” “I’ve got three!”

“I’ve possibly got bubbles, but it’s also possibly just me moving things around,” says Gemma Gifford ’22, eliciting some laughter from others.

Chapman surveys his masked, goggled, and rubber-gloved students as they pipette liquids into well plates, stir with toothpicks, and continue the excited chatter. He smiles behind his transparent face mask and says to no one, “Oh, I love this lab.” 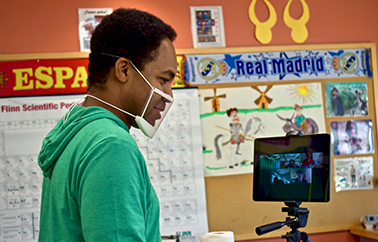 Determined “to exercise students’ inquiry muscles,” Chapman says, he and his Science Department colleagues have tackled “the logistical nightmares of how to make the labs work, how to ensure that we’re maintaining social distancing within the science classrooms.” They made individual lab kits and sent them home to remote students. Now, it’s clear that their efforts have paid off in a few ways.

“Especially when a lot of classes right now are centered around listening and taking notes because of the pandemic, labs have offered us an opportunity to learn in a more engaging way,” Eli Waisburd ’22 says. Additionally, he appreciates “being able to interact with one another, which we don’t often get to do in a normal classroom setting nowadays. It’s so hard to find times to connect with people.”

When “Come on Eileen,” the infectiously upbeat 1982 hit by Dexys Midnight Runners, starts playing in the background and prompts approving exclamations, Chapman says, “Whoever put this on my playlist, thank you.”

Each of his classes has a playlist, which anyone can contribute to—an example of how “Mr. Chapman creates a welcoming and lighthearted learning environment,” Grace Lang ’22 says, “that makes it easy to participate in the class and ask questions if you are confused.” She also likes using their individual whiteboards to practice concepts during game-like challenges and the frequent partner work, which enliven class. Eli values the variety of techniques—slide shows, YouTube videos—Chapman employs, and Sammy, a full-time remote student, appreciates that Chapman “is a really knowledgeable teacher who is willing to spend time to cater to everyone’s needs,” he says.

While admitting that the juggling act of hybrid teaching is a challenge, Chapman adds, “But I think it has the potential to be pedagogically good for us,” he says. He has applied his mantra, “If it doesn’t challenge you, it doesn’t change you,” to his teaching. “The hybrid model required me to change how I do things. I’m very hands-on in my teaching, and hybrid doesn’t allow for that as much, so we had to get creative.”

Similarly, Chapman applied some innovation and risk-taking to the Scientific Ethics class that he co-developed and is co-teaching for the second year with fellow science teacher Anthony Moccia ’10. “Anthony and I had to think critically about what the major pieces of our course are and how to translate them into this new environment,” he says. For one thing, they changed from point-system grading to a competency-based model and have found that the seniors are now more cognizant of the changes that they go through while taking this course. “Just because we’re in the hybrid model, that doesn’t mean we’re not trying to push the pebble forward. We want to make this course as inspiring as possible.”

Siena Lerner-Gill ’21, says, “It’s challenged me to think individually about my values, what I care about, what I prioritize when I’m making an important decision. It also addresses equity and injustice a lot: how can we design the system to help people who have fewer privileges and to create more equal opportunity? It’s one of the most real-current-world classes that I’ve ever taken. I love it.”

Chapman and Moccia believe that this course is ideal for co-teaching because they get to model what they are asking of their students: to present and listen to differing viewpoints, to trust that it’s a safe space in which to do so.

“Mr. Chapman and Mr. Moccia are a power duo! Their chemistry is really infectious!” says Mehdi. “The class feeds off of how much energy they bring to the table each day. I can also tell that they are really passionate about what they do. Overall, they make loving learning fun and cool.”

To end a unit on cloning, the in-person students head outside—taking remote students with them on their phones—where they can scatter across the turf field on an abnormally warm November afternoon and begin collaborating in trios for upcoming debates on cloning pets, bringing extinct or endangered mammals back to life, and therapeutic cloning of humans. Wanting to give their students some ownership of the course, Chapman and Moccia had their seniors choose some units—this year, including cloning and the death penalty—to study after starting the term with foundational units in decision-making, ethical theories, and cognitive-enhancing drugs. 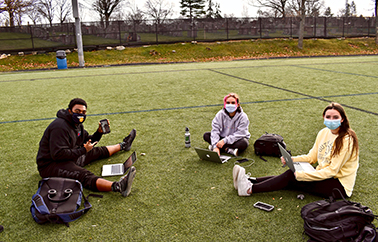 During each unit, Chapman explains, “They consider their own values, the societal context of that issue, the scientific content behind that issue, and the ethical theory backbone to accentuate that point.” Each ends with a project, such as these debates or, in the case of the last unit, writing a memo to a university president about student use, both legal and illegal, of cognitive-enhancing drugs, such as Adderall or Ritalin, on their campus. Noting the assignment’s purposeful requirement of the students to be active, concerned citizens of the world, Siena says, “It was one of the coolest projects I’ve ever done.”

In turn, Chapman is greatly impressed with “the level of thought the students are bringing, their willingness to share and to follow the Zoom norms that we established for ourselves—making sure that we’re giving each person our full attention, building off each other’s ideas,” he says. “Our seniors have just hit it out of the park.”

Thanks to these collaborative efforts between teachers and students, home runs are still possible even in a pandemic.