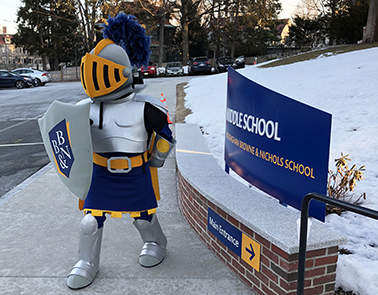 On a chilly Wednesday morning the week before Spring Break, students trudging off a bus at the Middle School were delighted by the surprising figure greeting them at the entrance.

Appropriate for a year that has carried the phrase "uKnighted" as its unifying theme, a life-size knight mascot paced animatedly up and down the front walkway on the Middle School campus. Decked out in blue and gold and carrying a shield with the BB&N logo, the helmeted mascot waved cars into drop-off spots and high-fived every student who passed its path.

"That's the one I voted on!" said one student excitedly, referring to the "choose our mascot" poll that had been filled out by students before winter break.

"Who's under there?" asked several other students, who were receiving no helpful hints from the mascot itself, which was remaining perfectly quiet.

After delivering approximately 160 high fives at the Sparks Street campus, the knight strode off to the Lower School campus, where it welcomed gleeful students and parents at Buckingham Gate, and then briefly popped its large, blue-plumed, golden-masked head into several classrooms in the Brick Building, New Wing, and Morse Building.

"A knight!!! Awesome! Can I touch the shield!", yelled gleeful students when the knight stopped by at the start of the day in Sylvia Elmer's second grade classroom (see video below).

Outside of a first grade classroom, a young girl offered her opinion to her classmate friends: "I think the knight is Dr. Price," she said, "I can just tell."

The mascot, silent as always, could neither confirm nor deny the student's guess. Instead, Dr. Price, I mean, the knight simply raised both of its four-fingered hands in the air in the universal "I don't know" gesture.

On Thursday evening, the knight also made its first Upper School appearance at senior skit night. The spirited new member of our community will make a number of appearances at future events this year and beyond. A "name the knight" contest will take place soon. 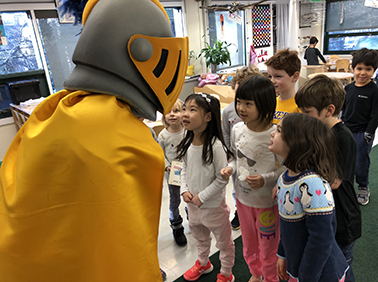 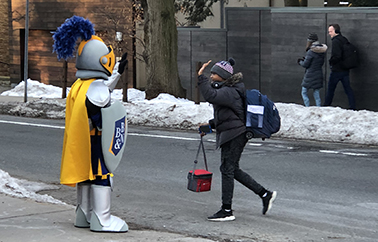 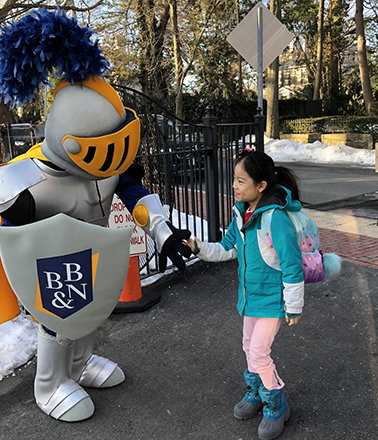