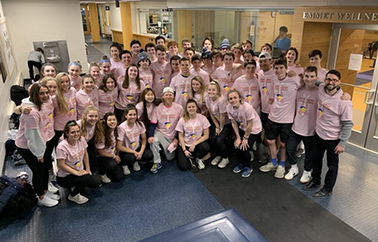 On Friday, February 7th, the boys and girls varsity hockey teams hosted their annual "Pink the Rink" event at the Nicholas Athletic Center. The event featured both teams playing back-to-back games, baked goods, and apparel on sale, and a large raffle. The event this year raised $2,660 for Breast Cancer Awareness and saw both hockey teams play hard for the cause.

While the boys lost to a very tough Thayer Academy team, the girls team beat a talented Milton Academy team 4-2, which improved their overall record to 16-3 on the year. Captain Maya Mangiafico '20 said, "Pink the Rink is one of our biggest events of the winter season and it is really exciting to see so much support from the student body. The school does a really good job of rallying behind the event and supporting the teams." There was a buzz around the Nicholas Athletic Center on Friday that went above the norm with the café area covered in pink décor, the players donning pink tape on their sticks, and many amazing raffle items on display.

Chuck Richard, BB&N Athletic Director, said, "Pink the Rink is an event that we will continue to host every year. Our families do an excellent job of organizing a terrific evening of hockey that raises money for a good cause. I was thrilled to see such tremendous camaraderie from players, families, and fans."