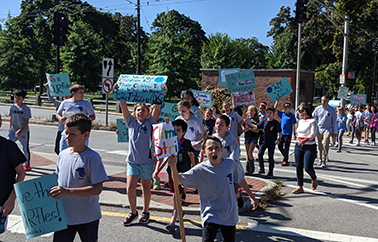 On Friday, September 20th many BB&N students participated in the Global Climate Strike. One hundred fifth and sixth graders, along with ten Lower School teachers marched into Harvard Square. Science Teacher Lauren Rader says, "My hope for having the students attending the event was that the students would see that there are many other people that are as passionately concerned about this issue as they are. I also hoped that just the experience of being a part of something like this might inspire our students to know that they are able to take action against or for something they believe in."  As the BB&N students marched to the rally, passing cars honked in support, and the crowd cheered when they arrived. Rader says, "That definitely illustrated what I was hoping for."

Several students from the Middle School took advantage of the opportunity to leave school early to attend the rally on the Boston Common. For interested students who remained on campus, the Library Learning Commons was turned into an on-site rally. Librarian Christina Pierre, Technology Integration Specialist Wendy Wunder, and Science Teacher Wendy Svatek organized a live streaming of the rally in Boston as well as a discussion of the global nature of the climate issues. They live-tweeted and created posters, as well. Students felt great passion for the cause as they watched the live video feed of those who rallied around the world. Max '24 says he wanted "to stand in solidarity with those who believe that climate change is real." Lea '25 agrees. "This is an important issue, and many people need to speak up against it. Something must be done about climate change. We have no planet B." 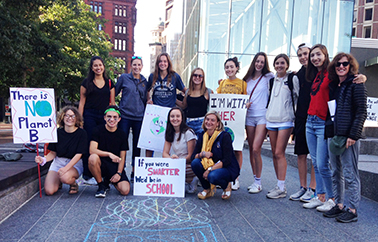 Ten students from the Upper School, with the help of Art Teacher Laura Tangusso, made the trip to the rally in Boston.  Tangusso was pleased that her students understood the importance of expressing and acting on their concerns.  "I hoped that [attending the rally] would give them hope by taking action about an issue they know is so critically important to their future, and by experiencing the power and affirmation of being with masses of people who feel likewise."