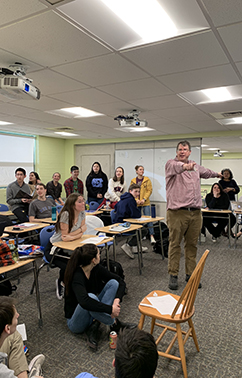 Twenty-two students participated in BB&N's 7th Annual Integration Bee on Monday afternoon. It took two hours of intense—and fun—competition to crown the 2020 BB&N Grand Integrator. "It was very exciting with a ton of talent, skill, and ingenuity on display," said Upper School Math Chair Chip Rollinson, who presided over the event.

Most of the participants are in AP Calculus BC; some participants have completed that class and are in Multivariable Calculus or beyond. Rollinson had the idea to start the Bee after attending a similar MIT event. "It was a lot of fun so we've had one each year since," he said.

The winner of the Bee was Andrew Zhao '21. Second place went to Philip Tabor '21, third to Karthik Padmanabhan '21. The top placing women were Cecilia Johnson '20 in fourth and Julia Shephard '22 in fifth. Zhao was awarded the yellow "Grand Integrator" hat, which is a reproduction of what the MIT winner receives. The top three finishers also received gift cards to Ben & Jerry's.