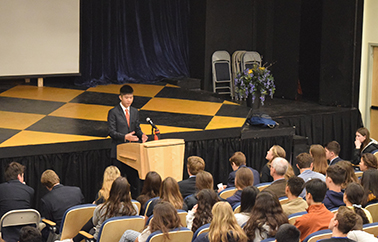 Puerto Rico’s dire need for more aid following its September 2017 devastation by Hurricane Maria has highlighted once again the U.S. territory’s often-debated status. That fiscal exigency—along with a compelling range of geopolitical, historical, and cultural arguments—was voiced powerfully last week in the Upper School Theater as a group of talented sophomores squared off in the annual All-Star Debate.

The stakes were high: if the United States were to act on the outcome of this split-decision contest, then Puerto Rico would become the 51st state in the Union.

Leading up to the All-Star Debate, students in each English 10 section voted for their “best-in-class” after a week of inter-class debates on other topics.

Jack Lichtenberger ’21 says, “I didn’t know a lot about this issue before the debate, but now I know a lot. I think we also educated the audience about both sides of the situation in Puerto Rico.”

The need for close collaboration among teammates also provided valuable experience to the debaters. As Alexi Melki ’21 notes, preparation for the debate required students “to communicate a lot with teammates, to elaborate on our ideas, and to help restructure each other’s speeches to make a cohesive argument.”

Speaking before the entire Class of 2021, teachers, and a panel of judges, the all-stars presented well-researched points that included the economic benefits of remaining a territory and the viability of independence.

In the end, the team arguing for a change in the status quo prevailed, according to this year’s presiding panel of judges: history teacher Leigh Hogan, history teacher Scott Tang, and junior Maia Pandey, one of last year’s all-stars and the 2018 recipient of the Jacobs Prize, which will be awarded later this spring to the outstanding participant in the All-Star Debate.