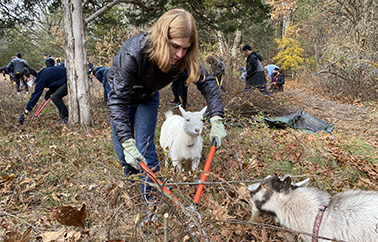 On a crisp, late-November afternoon, twenty Upper School students and three faculty/staff chaperones, accompanied by six roving, friendly goats, pruned their way across a meadow overgrown with buckthorn and other invasive species. Having hauled away the clippings, the group admired the swath they’d cleared at the Mass Audubon Habitat site in Belmont.

“It gave me such a positive feeling because we could really see our work, and we had accomplished something that was going to have a long-lasting effect,” says Ford Legg ’23. He notes that they’d been careful to keep from clipping stems bearing praying-mantis egg cases. “I also enjoyed learning about the Audubon Society community and meeting a bunch of freshmen and sophomores.”

Ford and his fellow Habitat volunteers were among 150 students who engaged with the greater community, either on or off campus, during the Afternoon of Service, held at the end of each athletic season. Serving as an introduction for some students to the Service Learning program, a key element of the Upper School curriculum, the Afternoon also enacts part of the School’s Mission—to “prepare students for lives of principled engagement in their communities and the world.”

Service Learning Coordinator Michael Chapman notes, “Part of that ‘principled engagement’ is for BB&N, as a privileged nonprofit institution, to reach out and make connections and partner with other organizations to work together toward common good. That’s how we make bigger systemic changes.”

Slightly curtailed by Covid restraints at some of the sites where BB&N students regularly volunteer, the Afternoon of Service offered seven options. Coordinators devised a new framework for the afternoon, which gave participants opportunities to reflect on their experiences and to hear presentations by a dozen students who just completed a Season of Service, in place of athletics or arts involvement, with an organization this fall.

Students who serve on the Community Engagement Leadership Board (CELB) were “instrumental in helping to get the word out, signing up students, and facilitating the groups,” says Chapman. “It’s exciting to see them in these leadership roles, to see that they’re genuinely passionate about specific issues.”

CELB member Alexandra Kluzak ’24 helped to facilitate a large group, armed with gloves and trash bags, that crossed the road to clean up along the Charles River. Noting that the cross-country teams use the River paths and that she, a member of the crew team, is one of many rowers who enjoy the River, Alexandra nods to the neighborly connection BB&N has with the Charles. “To aid in cleaning it up and maintaining it felt very important; it really did feel like giving back,” she says. “It feels even more meaningful to be doing this as part of a community.”

Likewise, Danny McNeill ’23 appreciates that “the school itself recognizes that cleaning up is something we can do to give back.” He and his hockey teammates volunteer each year for the Charles River Clean-up as a way of starting their season. “We have time to talk to each other while doing something productive,” he says. 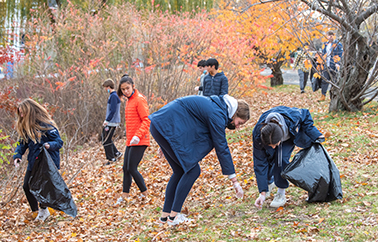 While one group bused to the Banneker Charter Public School in North Cambridge to play outside and do some educational enrichment with the younger students, another attended an on-campus presentation about advocacy by Laura Rosi, CEO of Housing Families, and assembled care packages for those displaced from their homes. Additionally, three other on-campus activities provided students the chance to work with organizations founded by BB&N students.

About 30 Upper Schoolers spread out on the Community Room floor to make colorful no-sew fleece blankets for the nonprofit Seams of Hope, founded in 2014 by Alyse Bierly ’19 to serve children with DIPG, a rare type of childhood cancer. Her sister Tess Bierly ’22 has also contributed her time and effort to the cause. She finds it gratifying “to see the impact, the smiles on the children’s faces [in the photos], and to understand it’s less about giving them a blanket and more about showing them that you care, that you’re sending them love and support.”

Meanwhile, down the hall, fingers clacked away on laptops as 10 students volunteered for Boston COVID-Tutoring, founded by David Min ’22 in April 2020. “Our mission,” David says, “is to provide free virtual tutoring to kids in need across the greater Boston area.” The nonprofit organization now has 350 volunteers, including many BB&N students. During the Afternoon of Service, volunteers did outreach work, David explains. “They’re contacting other organizations we might partner with to serve under-resourced children, such as immigrants or those who are homeless.”

Also inspired early in the pandemic to care for a specific portion of the population, Saffy Patel ’22 co-founded with her sister Letters Against Isolation (LAI), which organizes volunteers to send cheerful notes to self-isolating seniors and those in care homes. On the Afternoon of Service, students made over 50 cards. Angie Teig began volunteering for LAI earlier this fall because she has seen how hard the pandemic has been on her grandparents. Writing cards, she says, “is a simple act of kindness that will brighten someone’s day.” Noting that a few volunteers brought friends with them that afternoon, Angie adds, “If it’s a group activity with your friends, you all get really excited about it. When people realize how fun it is, that might encourage them to do more.”

At the end of the card-making session, one of those new recruits, Micah Gershenson ’25, says, “It was a cool experience. I’ve never done something like this before. When I was writing, I could feel what I was saying. I could see somebody opening the letter. It made me happy.”