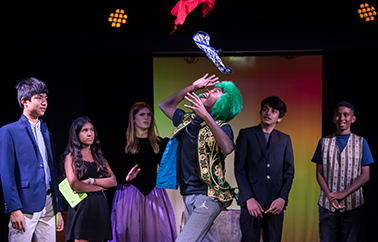 Tackling the classic “who dunnit?” theme, this fall’s Middle School play featured humor, plot twists, and audience participation. The play, Exit Stage Death, tells the story of a night at the theater gone dramatically wrong. When a murder occurs, the mystery of who did it takes center stage, with the culprit being determined by the audience itself.

Before the show, student actors mingled (in costume and character) with the audience, allowing viewers to question each student and get to know their stage persona. At the close of the play, the audience was invited to interrogate the suspects and determine the culprit via a vote.

Written and directed by Middle School theater teacher Christa Crewdson, Exit Stage Dead is a delightful exploration of acting and intrigue, one which breaks the fourth wall to make the experience truly interactive.

Click here for a photo gallery of the performance.