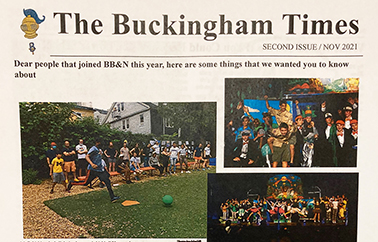 In a move that has The Boston Globe quaking in its boots, BB&N’s Lower School has jumped into the newspaper business! The Buckingham Times launched this year to much acclaim on the 12 Buckingham campus.

“The newspaper originated when the current sixth graders were in fourth grade,” notes faculty adviser Christina Dello Russo. “Christian Chow ’28 started writing a weekly newsletter and other children joined in. The group continued on their own in 5th grade, and then Anna Gross-Loh ’28 wrote a proposal to the Lower School director proposing the launch of an official newspaper for this year.”

Run completely by sixth grade students, the paper tackles topics of interest to the campus, including interviews with students in other classes, fun puzzles, news items, and editorials. (An early favorite feature has been the lunch reviews in which no punches are being pulled!)

“The students’ main goal is to have the paper be ‘owned’ by the Lower School, and they are hoping to take on interested 5th graders in the spring so they can pass it on to them,” Dello Russo says.  “It’s been impressive watching them work collaboratively…they wanted to make sure to include any sixth graders who wanted to be part of it.”

The students’ hope is to publish an issue roughly every six weeks.