BB&N’s Upper School and Middle School students are participating in the Global Education Benchmark Group (GEBG’s) student dialogues, where they discuss the United Nation’s Sustainability Goals. These goals vary from promoting peace through responsible production and consumption, to gender equality.

When asked to describe their experience, our students have used such adjectives as “inspirational”, “engaging”, “thought-provoking,” and “informative.”

“Each time I participate in a dialogue, I learn so much from listening to students from other countries,” said Finn Wiegand, an Upper School freshman. “For me, getting to talk to students from different backgrounds than me is invaluable.” Finn has participated in three dialogues this year and plans on continuing.

The most recent dialogue was titled UN SDG 16: Peace, Justice & Institutions. Students were asked to consider several points for discussion, such as what aspects of Sustainable Development Goal (SDG) do students see in their local and national communities. They were also asked to consider current and future actions and what contributions they can make as individuals to help contribute to the global effort to accomplish these goals.

Caroline Roche a junior and a participant in this dialogue said, noted how the dialogues allowed participants to bridge differences. “All of the participants had diverse perspectives, many of us were able to come together and agree on certain solutions, she said. “I was surprised at how much I could relate to others despite our differences.”

As her group of peers talked about bias in education systems and how educational institutions try to align with a certain agenda, she was struck by how different schools highlight and omit certain aspects of history.

GEBG’s goal is to promote the development of global citizens in independent schools and beyond through global curriculum, experiences, and institutional support. With over 300 member schools around the world and spanning 16 countries, GEBG connects students and professionals via zoom to tackle global issues.

Two other juniors, Njema Reza and Alanna Kramer Gomez participated in the dialogue named UN SDG 13: Climate Change. Both noted how their perspectives were brought into question after listening to their global peers. Alanna mentioned that “hearing people’s perspectives who lived across the world was a valuable takeaway. We are used to living in a community where everyone thinks the same and shares similar views. So hearing that another perspective was enjoyable.”

At the same time,  participants recognized that solving global problems is extremely challenging. Junior Graham Bateman noted how media is increasingly being used as a political weapon to promote agendas.

Yet, despite the intensity of the dialogue and subject matter, Graham came away hopeful. “I had a wonderful experience and I left this session feeling more informed about the topic.” 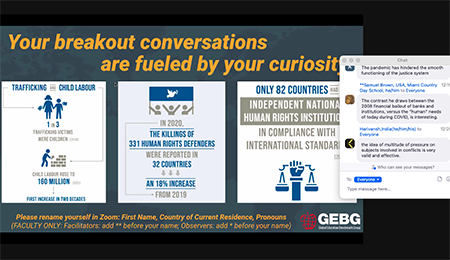 BB&N’s Middle School student Sonja Peetz-Larson from 8th grade described her experience as insightful, exciting, and educational. “I found it amazing to meet so many different people around the world, zooming and talking with them about current issues in our world today,” she said. “Their perspectives broadened my own.”

Middle School Faculty also took part as facilitators in the dialogues. Miles Billings, the history department head was fascinated to hear from students from India, the Netherlands, and the UK. He loved hearing about their experiences and enjoyed how articulate and thoughtful the students were.

Tiffany Rice, the middle school’s DEIG practitioner, cherished her time as a facilitator. As a facilitator, I love the fact that student voices are at the center of this experience,” she said. “It's a wonderful opportunity to hear so many students from all over the world weigh in and share their perspectives on important global issues. The very first dialogue that I participated in, I barely had to say anything because the students had so much to offer.”

Indeed, all participants, facilitators, and students emphasized the importance of listening to others’ perspectives. Thanks to the GEBG dialogues, BB&N’s students are expanding their world far beyond the classroom as they develop into competent global citizens.