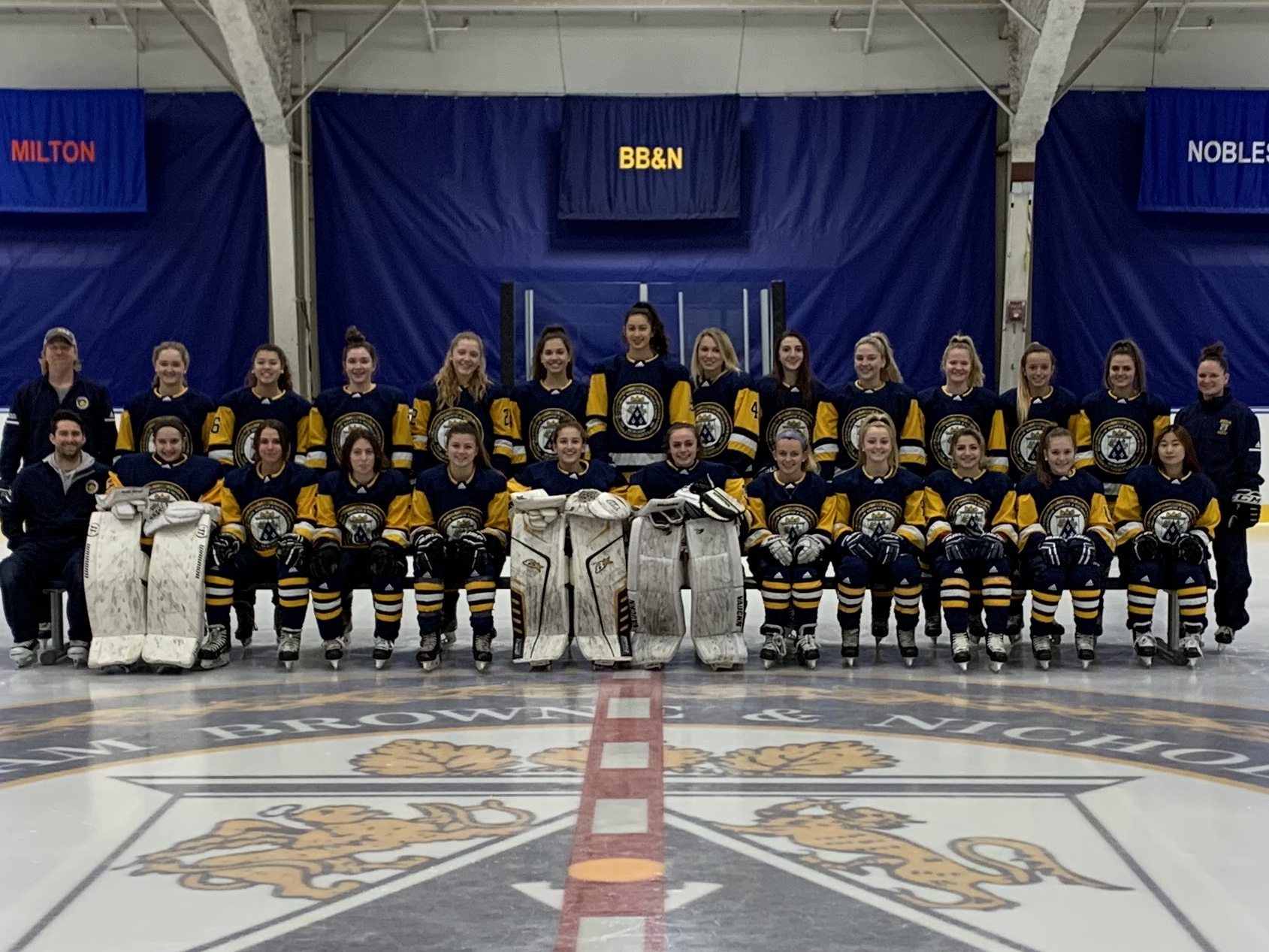 "It is the mission of the Knights' hockey program to provide student athletes with an equal opportunity to reach their maximum potential on the ice, in the classroom, and in the community, and to prepare its players to excel at the collegiate level."

Click here for a history of the impressive BB&N Girls Hockey Program.

The Knights will look to build upon their successful 2018-19 campaign, which saw them post their highest winning percentage since the early 90’s. The focus of the season will be on hard work and playing with consistency. Each player has used the off season to improve upon their skills and now they are focused to take on one of the most demanding schedules in all of New England Prep Hockey.  Their schedule includes contests with 7 of the 8 playoff teams from last year’s Division I tournament, and a much welcomed return to the Harrington tournament. The team will also host a New Year’s exhibition showcase with NAHA, Nobles and Standstead, and they will travel to Canada over the MLK. Jr. weekend to test their mettle against opponents north of the border.

As the students prepare for the winter season ahead, the team will lean on their seniors for leadership. This year’s edition consists of five seniors, 3 forwards and 2 goalies. Dani Bernstein and Vic Kennedy will look to shut down the opponent’s offense as they backbone the goaltending position. The other three seniors will be looking to put pucks in the net and lead the offense. Jenna Hallice, Maya Mangiafico, and Molly Griffin will form an offensive trio that will lead the Knights in 2019-20. The roster is deep and talented with younger players as well, and they are focused for an exciting season on the ice.

The Knights finished with a 15-8-2 record, 8-4-0 in the league, to earn fourth place in the highly competitive ISL. Even though the team just missed out on the playoffs, they finished with the highest winning percentage since the 1998-99 season. The senior class was the backbone of the team and their leadership helped to ensure that the girls gelled into a cohesive unit. The focus was on establishing a family type atmosphere within the locker while maintaining an on ice excellence that allowed the school to compete against the best competition in New England.

BB&N played one of the most difficult schedules in New England prep school hockey and boasted the second highest win total in school history. A few highlights were a 2-1 victory over Philips Andover and a 5-5 tie against New Hampton where the team stormed back in the third period to erase a 4-goal deficit. There were also some great efforts against teams that didn’t produce wins as well. BB&N fought hard against Nobles and Tabor, but came up short on both occasions by a 2-1 count. The girls played hard all season long and they competed in each game to the best of their ability.

Seniors, Rei Halloran, Siyeon Lee, Jameson McKenna, Jori Balsam, Lauren Jackson, and Halley Douglas provided a strong foundation for the younger players both on and off the ice. Each senior provided an integral piece to the team in the area of on ice play and off ice accountability. The 2019 senior class worked hard over the years to help establish a winning tradition at BB&N. Thank you to the graduating class of 2019 and we look forward to reading about your future successes at the next level. 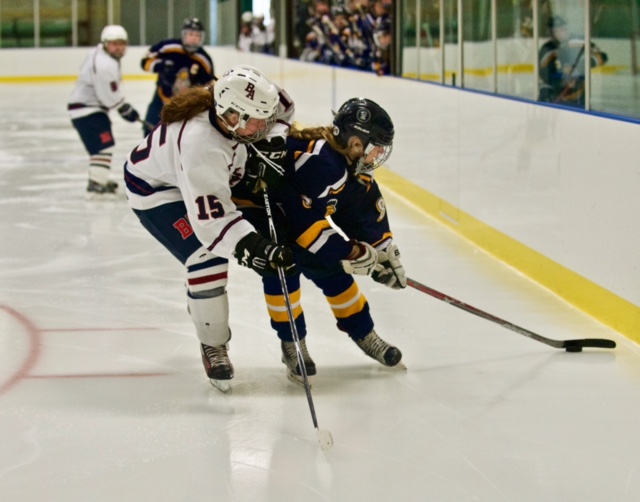 The winter season was an exciting one for the Lady Knights as they put forth
their best effort each and every game. Each and every player had a hand in the
team’s success and was able to gain valuable playing experience against the
toughest competition in New England. The Knights finished the season with a 16-10-
3 record and made their fifth appearance in the Division I New England Prep School
playoff tournament. Their season came to an end with a hard fought 2-1 loss to the
eventual Division I champions.

There were many highlights over the course of the season, beginning with
the play from the senior class. The team will lose 6 players to graduation, and all of
them will be sorely missed. The seniors provided the team with great leadership
and helped the team gel into a cohesive unit. Their play on the ice was instrumental
to the overall success on the ice throughout the winter. The Lady Knights finished
2 nd in the Harrington Tournament for their best finish in 5 years, while also
compiling the highest amount of wins in a season in their program’s history. The
team also maintained a strong ISL record by finishing 7-3- 2 in league play en route
to making their playoff run.

Next year is shaping up to be an exciting one as well as there will be 19 letter winners back on the club. The new additions will also bolster the club’s speed and offensive talent. The returning players will have to work hard to maintain the positive leadership that was set in place by the departing seniors. BB&N would like to thank the class of 2018, which included Kayla Duran, Izzy Nowiszewski, Brooke Shachoy, Emily Brower, Olivia Maduro, and Maddie Burns, for all of their contributions to improving the program. 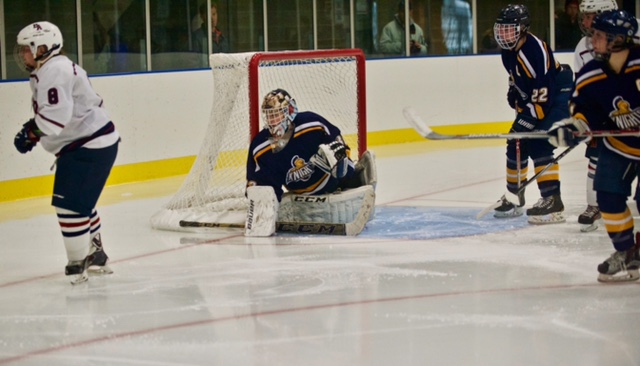 Knights Making a Difference within the Community 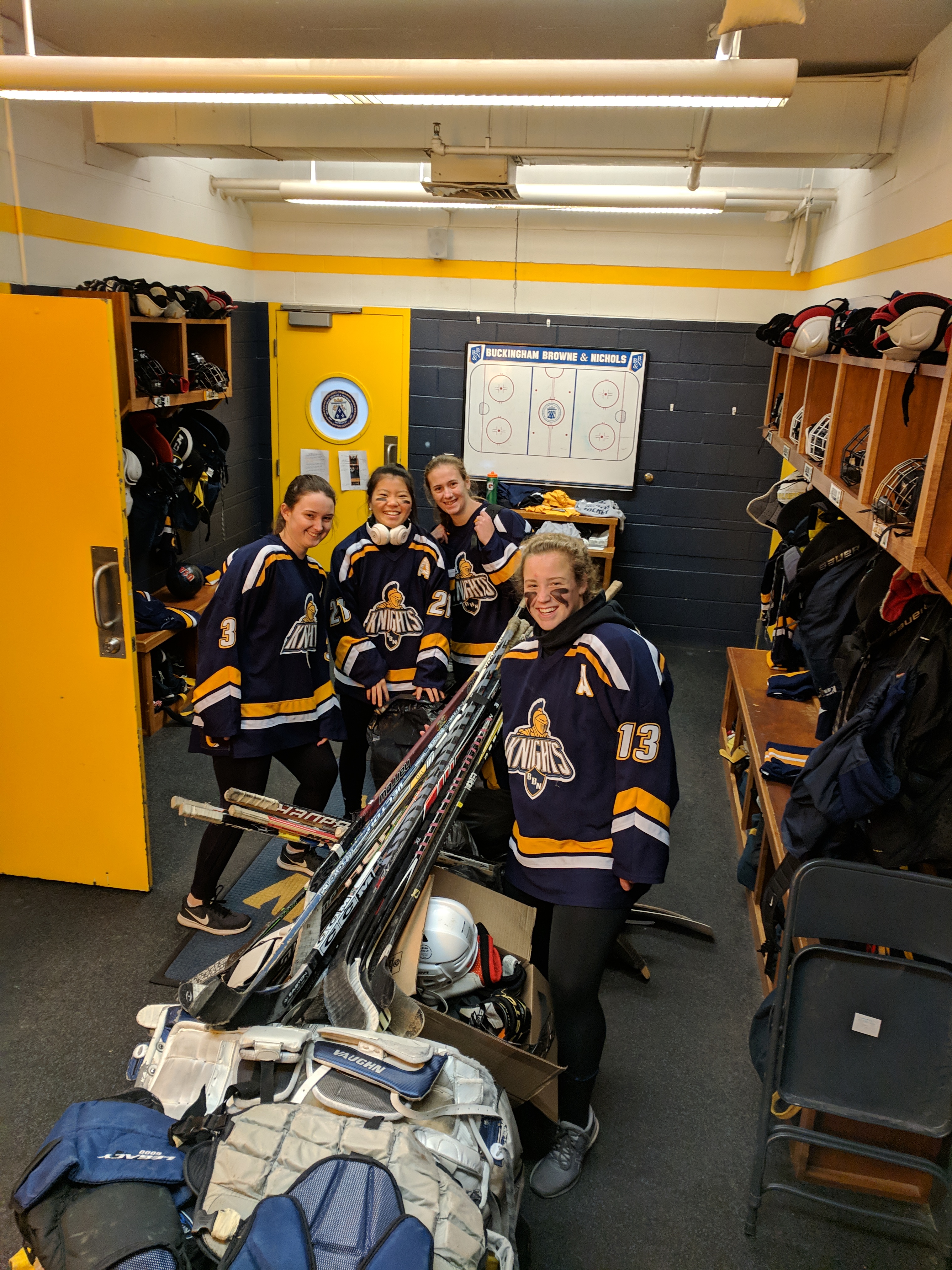 The Girls’ Varsity Ice Hockey Team worked together throughout the course of a week to collect over $22,000 worth of used hockey equipment to donate to the “Skate to South Africa” charity. The East Coast Wizards sponsored the charity, and the main goal was to provide equipment to the children of South Africa to help make hockey more accessible to that part of the globe.  On Wednesday, December 5, 2018, seniors from the BB&N team helped load the equipment into a school van and Coach Bourget made the delivery to the Edge Skating Rink in Bedford, MA. “I was so proud to be the BB&N coach walking into that rink because the rink staff at the Edge could not believe how much equipment was actually coming through the door from one location,” Bourget said. “It demonstrates that people can show their true kindness through sharing, as we use the game of hockey to help others that are not as fortunate as us.”  This community service project marks the sixth consecutive season that the GVH team has participated in a charitable effort to benefit other people in their community. 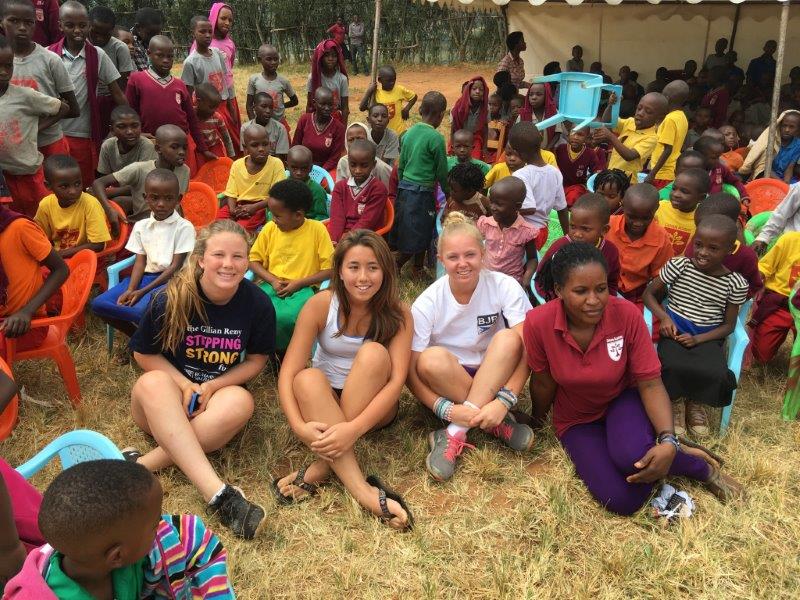 The Lady Knights focused on a charity that began when some of its players were in the 6th grade at the lower school. The Crimson Academy is a school in Rwanda that has teamed up with some of the teachers and students at the lower school to provide children in Africa with the opportunity to receive a proper education. One of this year's senior captains, Brooke Shachoy, has visited the school on many occasions to help build classrooms and bring supplies to the students of Crimson Academy. This season each player on the team obtained a sponsor that donated a certain dollar amount for each goal scored on the ice. It was a complete team effort, as each player found one sponsor, and did the job on the ice by tallying 70 goals over the course of the season. Score for School was a unique way to give back to the community while tying in the life long learning of our student athletes that began at the lower school 7 years ago. A big thank you to all of our sponsors and we hope that the Crimson Academy can benefit from the goals that the Knights scored on the ice! 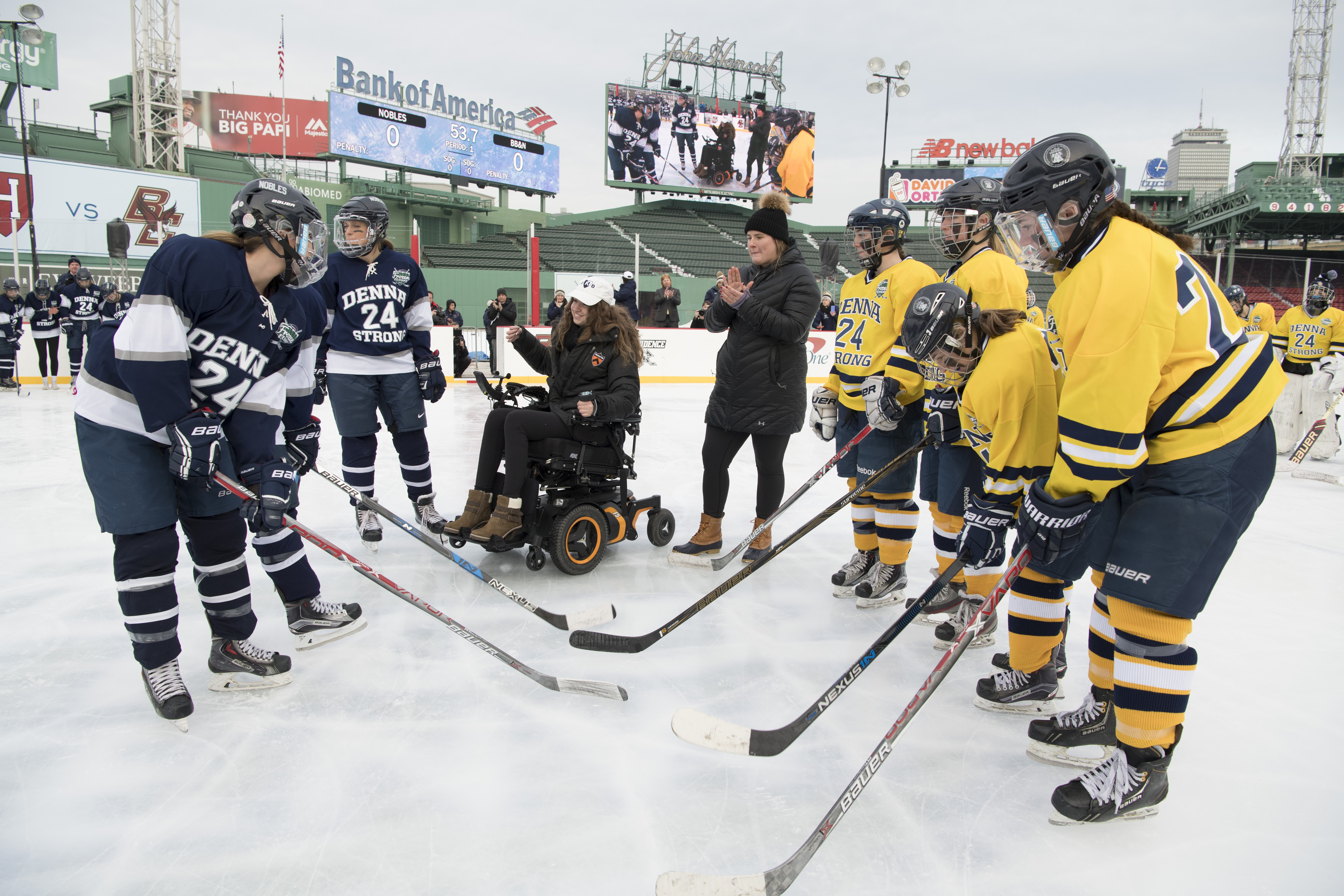 The 2016-17 season marked the fourth consecutive season that the BB&N girls’ varsity team participated in a community service event. This time it was special for all involved as the team raised money for the Denna Laing Foundation, and capped it off with a charity game at Fenway Park against Nobles. All of the money collected by the team went to the Denna Laing Foundation, and they proudly displayed her name on their game sweaters. BB&N and Nobles were both honored to have Denna drop the puck for the ceremonial opening face-off.  The second game of the double header featured two BB&N alums as Katie Burt started in the net for BC against forward Bradley Fusco playing for Harvard.

The BB&N community would like to thank Denna Laing, the Boston Red Sox and Nobles for making this event an unforgettable day in the lives of our student athletes. We love you Denna!

2015-16 Wigs for Kids:
During the 2015-16 winter season the Lady Knights worked with the Wigs for Kids foundation for their community service outreach. Three players, along with Coach Bourget, donated their hair to the foundation as it helps to provide children with wigs as a hair replacement treatment. The team also worked together to raise $456 in hopes that the money could provide some assistance to the Wigs for Kids Foundation. Congratulations to the girls for their continued support and dedication as they work on making their community a better place.
2014-15 Neely House:
The Girls' varsity ice hockey team and their families donated many needed items to the Neely House Foundation. The 2014-15 captains, Allyson Noenickx, Bradley Fusco, Cara Najjar, and Jackie Diffley, delivered the collected donations to the Neely House on Monday, December 15, 2014. Thank you to all who donated items and the BB&N Girls' varsity ice hockey team thank you for your support.
2013-14 Habitat for Humanity - Lady Knights Build for a Cause:

Saturday, March 1, 2014 marked the first of many team community service days performed by the girls varsity hockey team. Ten members of the program traveled to Roslindale, Massachusetts for a one day build with the Habitat for Humanity program. It was a complete team effort as each and every player helped to raise $850 to allow a portion of the team to attend the build. Once the girls arrived at the site, their construction talents took over, and throughout the day they helped to install windows, insulation, and siding. Coach Bourget was excited to see his team perform so well with this task. Bourget said, "Being an athlete at BB&N is more than just playing the game. You need to be able to give back to your community as well, and our girls have done that here today in a most successful way." It was a great day, and it helped them grow as a team. The girls varsity hockey team would like to thank Tricia and Fuller Winton for their support with the project. 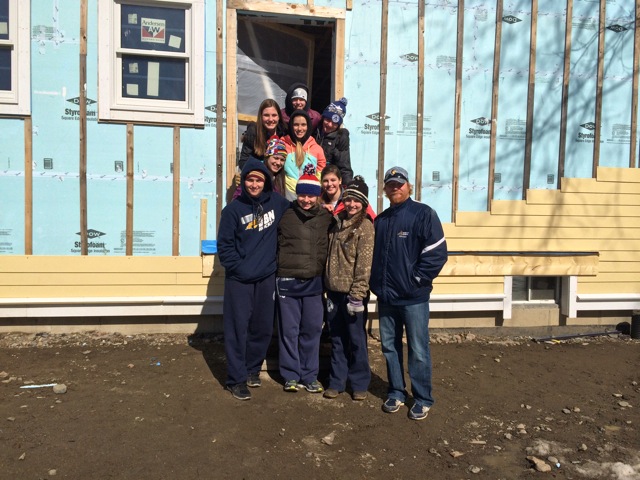